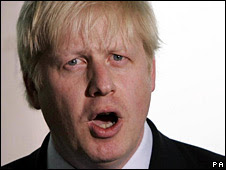 Did anyone else feel like staying in bed this weekend? Did anyone else struggle with basic tasks like shaving and making the tea? Did anyone hesitate before opening the papers or firing up the net?
It was so fragile. Just for a little while longer, we could pretend that it had all been a dreadful booze-fuelled nightmare and all we needed was a quiet day with the curtains closed and we'd be fine. But it's Monday morning, now, and the Tories have still got the councils. There's still a fucking BNP member on the London Assembly. And by 140,000 votes, smug Tory clown Alexander Boris Johnson is now Duke of London and spoilt Prince of the underground. We start this clammy May week in a country that has lurched drunkenly to the right: get the resolve from the cupboard. It's going to be one hell of a hangover.

Look at him. Look at his terrible pink face. On the BBC's post-victory interview, the BNP's second-choice candidate began to reveal his true colours. No more the bumbling, Bertie Wooster-esque gaffe-happy clown, oh no. Someone's been training him. Only his eyes and mouth moved, lizardlike, apart from occasional forays into the tantrumish rage of a small toddler when the BBC interviewer asked if he could call him 'Boris'.

He was obtuse, he interrupted, was massively self-satisfied and oozed privilege. He repeated over and over again 'how much he had wanted to win,' and now that the Blond has squealed and cajoled us into giving him what he wanted, we're about to find out if he really has any useful policies beyond 'Boris for Mayor'.

The BNP back the Blond for some very good reasons: he is uncomplicatedly racist, a misognyist, a snob, an elitist and a hard-line right-winger who supported the Iraq war from bloodshed to bloodshed and condemns gay marriage in the press. His reactionary and disgusting views are indulged because apparently he's a cheeky old diamond in the rough, a people's politician who's not afraid to speak his mind. Festering bollocks to that one. Those who remember Enoch Powell and his rivers of blood will recall that just because someone's openly racist and sexist does not mean they're not a swindling, duplicitous bigot.

Enough of this. We KNOW all this. What we don't know yet is what we're going to do about it. We've got years of struggle ahead of us without the reassurance of the Labour back benchers when we criticise our government. We may not have a decent and dignified left-wing politician in charge of the capital. We may be terrified at the prospect of our country slipping slowly and inexorably towards the right, but this is what happens when people lose faith in democracy. We use it to self-sabotage, to elect bigoted leaders greedy for control and we roll over to call the fuckers 'uncle'. And it's not that they don't believe in equality, of course, but some politicians - politicians like Boris - believe that some animals are more equal than others.

On this clutch of islands, we do not stand and applaud when party leaders enter the room, but Alexander Boris De Pfeffel Johnson, who has Prime Ministerial ambitions, almost certainly sees himself as that sort of politician. He wants to be in charge, and his own power is his highest political ideal. I remain on bloody tenterhooks to see what the hell he's going to do with that power now he's got it, but for whatever it's worth, be assured that my comrades and I will be keeping a very close eye on City Hall over the coming months. Look forward to exciting and relevant new blogs, city-wide activism in the face of the Forward Intelligence Team's bullying, anti-capitalist drunken ranting and possibly an album of radical folk songs. Goshdemnit, but we're going down shouting.