The day the music died. 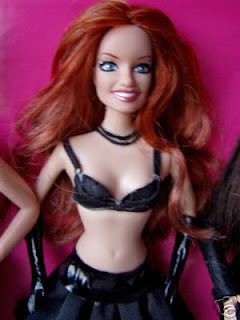 And we all know the real song
but we won't sing along
'cause our boyfriends and girlfriends
and parents will say
Don't be a square, grow your hair and be happy
It's not god that made you this way -

'Our Daughters Will Never Be Free,' The Indelicates, 2008

We have a very short window in which to start asking some crucial questions about wealth and gender. We have a short window, whilst the FTSE and the Dow and the Nikkei buckle and collapse, to commit blasphemy. To say that the very nature of financial markets, of patriarchal capitalism itself, engenders ideological violence against women - and by association, men - everywhere.

Fact: markets will seek to maximise profits. Fact: sexism sells. The image of the cackling city boy stuffing his bonus into a hooker's disembodied garter - just the leg showing, never the face - has become one of the icons of hypercapitalist success. However you wrangle the incentives, an economic model spawned and nurtured in an atmosphere of male privilege will seek to make money by selling women's bodies back to them, by selling them to other men, by exploiting women's work and by hijacking femininity as a saleable commodity and nothing more.

I remember the first time I met Ginger Spice. It was four years ago, and I was standing at the reception desk in the acute anorexia wing of a London mental hospital. I was there because there was nobody but my receptionist to watch me and make sure I took my meds and kept my meal supplements down, wearing a floppy hat and a tracksuit that flapped on the bent coat hanger of my body, drawing slogans to keep me occupied. And Geri Halliwell walked by.

She was there to see the girl in the next room from mine, a friend and a fan. And my first thought was how very, very tiny she was – barely five feet three in massive heels, dwarfed by shopping bags and a bunch of violent pink crepe-wrapped roses. Tiny and fragile-looking, all desperate smile and thin hair bleached back to its natural pale strawberry-blonde, Geri Halliwell had been in the press all year, and still is, thanks to a much-touted recovery! from anorexia, bulima and other lapses in celeb inscrutability. Through the haze of numb, sour fear that dogged those hospital days I remember thinking: that’s Ginger Spice. That pale, frantic creature is the same girl whose posters I had on my walls, whose feisty, pumped-up pop smashes were the first singles I ever bought with my pocket money. That’s Girl Power, right there. There it goes.

How sad, and how empty it all seems now. In 1996, we were told that anything was possible. Girls were powerful! Girls were sexy! Girls were marketable! You could be anything you wannabeed! Fast forward twelve years and the record is scratched and broken, the Spice Girls themselves bleached by years of pap-dashes into wasted, desperate husks of the energetic, ballsy girls we once thought we knew. We made ourselves into products again the instant empowerment was wrenched away from the feminist movement and assaulted with price-tags, we were consumed; we consumed ourselves. Femininity was for sale, and too much of it made us sick. Sick of ourselves, sick of our lives, sick of looking forward to another twenty years of hard sell until we could no longer pretend that we were young and available and found ourselves consigned to the scrap-heap with the computer shells, splitting bin-bags and acid-leaking fridges.

The year I started eating again - really eating, not just subsisting on crackers and tea - the sub-prime mortgages broke and the markets began to deflate like a balloon at the end of a long party. Right now, a loaf of bread costs more as a percentage of the average wage than it ever has. Groceries are getting harder for everyone to afford. We can no longer stuff ourselves with impunity, but right now, right this second, I feel something I spent my whole life missing. I feel something girlishly blasphemous and slightly obscene. I feel full.
Shopping, preening, starving, serving, fucking. Five key activities for my generation of young women under capitalism. We were born in the shadow of Thatcher and taught to prepare ourselves not for productivity, but for producthood. We do not remember living through anything but boomtimes, but for us, money is still something we will not win without the trappings of servility; we came to learn that nothing sells better, or faster, than our bodies, and the better and faster we could cash in, the happier and worthier our lives would be -

There's no better example of the pitfalls of unregulated capitalism than the strange case of the 22-year-old woman, known by the pseudonym Natalie Dylan, who is selling her virginity in hopes of financing her college education. She wants to be a marriage and family therapist. This transaction is "capitalism at its best," according to the manager of the Moonlight Bunny Ranch in Nevada, which is brokering the deal. He made the point on a TV show last week on which we both appeared as guests. I argued this is capitalism at its worst. You've got a desperate woman (she was allegedly defrauded out of a hunk of cash by her no-good dad); virtually no safety net if you're poor; gargantuan college fees, thanks to little government assistance or regulation; and the perfect storm of circumstances that makes a young woman think it's OK to sell her body. Scary? Yeah. Does it have to be this way? No. It's about the morality of the market. - Marian Meed-Ward, Kingston Whig-Standard, Ontario 25.09.2008

Maybe I'm a little biased, being accustomed to a student lifestyle and still having no job to lose- but I say let it all come down. Let the markets crash, and let the ugly arrogance of a society rent by the gashes of commodified gender come tumbling with them. So what if the glittering future that was promised to us as long as we behaved ourselves like good little girls has vanished? We may have been trained as hyper-consumers, but we don't have to live that way.

Let it all come down. Let's see the arrogance of the testosterone-stinking trading floors thwarted and the altars of deregulated markets toppled: we don't need the old gods and their archaic laws any more. Now that governments have intervened with basic financial packages to has save us from utter disaster, we can breathe a little easier - but the ideology of Western capitalism will never be the same again, and its discourses of gender are open to decimation. Bring it all down.