Hobby horses of the apocalypse! 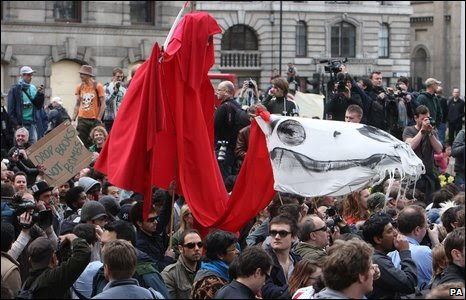 Good grief, but the G20 protests are kicking up some action. According to Red Pepper's tweeter-on-the-ground, all you can hear is barking dogs and police helicopters, and it's getting ugly. Like an idiot, I promised myself that I'd stay home and ohyes, get a lot of work done all day like a good girl. What's actually happened is that I've been sat in front of the laptop getting wriggly, checking the news every thirty seconds, letting a succession of cups of tea go cold and wishing I was down on the streets.
Because I believe in the power of protest, and because this one in particular bloody fascinates me. I freely admit that I thought the 'four hoursemen of the apocalypse' four-pronged march stunt might be a little complicated to pull off, but the jammy bastards seem to have made it work, and my god the symbolism smells great.

Because although the terms are narrower than those of Saturday's march, it still isn't a protest demanding any one specific, actual thing. It's the people of Britain, on the streets of London, angry about the apocalypse their lords and masters have brought down on their heads. It's insurrection in its purest form, and in its most archaic form: it's the pageantry of the old May-Day celebrations, the traditional time of public anarchy, complete with hobby-horses.

The hobby horse is a traditional British carnival figure from folklore, - you might recognise it as the same type of freaky-looking stick-and-blanket horse that led the procession in The Wicker Man . The hobby-horse represents anarchy, foreboding, the changing of the seasons, and really bad seventies haircuts, amongst many other things. Look, here's a video of the 'Old 'Oss at Padstow.

Now, here's a video of the four horsemen of the apocalypse this week in London. Click through to 1:05. Now, imagine Christopher Lee dancing in front of that ominous samba band with a great big grin on his terrible scary face.

See what I mean?

I can't imagine an apter piece of semiotic street theatre. Something deep in the blood and the bone is infesting these protests. Something in our cultural memory calls to us, and no, I don't have a drop of English blood in my veins, but I can feel it too. This country is angry. The land is angry. The people have brought their carnival of apocalypse to the streets of London, as they have done for thousands of years.

This is a festival of fury, a carnival of chaos. This is the British people calling down the doom of the seasons and reminding the Men of Property that they rule only at our behest, and they'd better not forget it. Are the G20 frightened? Are the city workers frightened, with the howling, laughing mob under their windows screaming for them to jump?

They should be.
Oh, the hell with it. I'm not getting any work done at all any more. Girls and boys, come out to play. See you at the riot.
Posted by Penny Red at 1.4.09

Email ThisBlogThis!Share to TwitterShare to FacebookShare to Pinterest
Labels: cartoon politics and the end of history, direct action