Being a Woman: Germaine Greer, Caster Semenya and gender paranoia 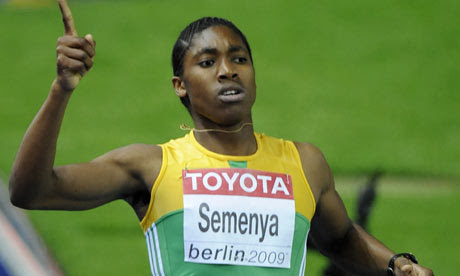 This is painful for me. I was scribbling notes in 'The Female Eunuch' and 'The Whole Woman' before I lost all my milkteeth; I worship her irreverent, punchy prose; but there's no escaping it. These days, Germaine Greer is a prejudiced, ignorant dickwad.

In her rather confused verdict on the Caster Semenya controversy, Greer comes up with the following gem today:

'Nowadays we are all likely to meet people who think they are women, have women's names, and feminine clothes and lots of eyeshadow, who seem to us to be some kind of ghastly parody, though it isn't polite to say so. We pretend that all the people passing for female really are. Other delusions may be challenged, but not a man's delusion that he is female.'

In dismissing all transpeople as 'ghastly parodies', Greer hardly does any better in the grand game of unthinking prejudice bingo than the disgusting commentators who have decided that just because Semenya, a phenomenally high-achieving athlete, is big, butch and brilliant at sports, she can't be a girl. Let's take a little look at what womanhood is, according to Greer and others.

Greer believes that my 'womanhood' is defined by my tits, my bleeding cunt and my XX chromosome. She also believes that 'woman' should be my primary identity: before I think of myself as a writer, a journalist, a sister, a daughter, a lover, a friend, a consumer of trashy vampire novels, I should consider myself "a woman, first". In other words: my cunt and tits are what make me, me. Well, gonads to that.

What defines this holy femininity, in the radical feminist assessment? Is it having breasts? Having a twat? Being curvy? Being fertile? Having an XX chromosome? Yes? Well, then, it clearly sucks to be one of the significant proportion of women who are none of these things, excluding the trans population for a moment: the women all over the world who lack breasts after mastectomy or a quirk of biology; women who are born without vaginas, or who are victims of FGM; women who are androgynously skinny, naturally or because of illness; women who are infertile or post-menopausal; or the 0.1% of women who are intersex. Who's to say that these people are not women too, if womanhood is the gender identity that they prefer? Greer shares something with Christian Fundamentalists here: none of them are interested in the actual social and biological science behind their unthinking assumptions.

In fact, 'womanhood' is not a holy, immutable quality. 'Womanhood' encompasses a complex spectrum of biological facts just as 'femininity' encompasses a huge range of social and cultural factors. 'Woman' is not a binary fact, set irretrievably and forever against 'Man'. The reason that radical feminists and social conservatives alike find transpeople so terribly threatening is that they know this better than anyone else.

Transpeople know that however much it happens to mean to you, femininity is, in fact, something that can be bought from a shop*. They know that identity is fluid and that womanhood itself is not a fixed biological quantity. They know that the state of being a woman or being a man is something imposed from without, something that can be altered, and they are living, breathing proof of that radical truth. And that's horribly threatening to recalcitrants everywhere.

Let's come back to Caster Semenya, whose physicality is rather more of an issue for her career and identity than it might be for the rest of us. I for one am disgusted by the popular reasoning that any physically high-acheiving woman who is not stereotypically 'feminine' is an aberration, and therefore must actually be a man. Caster Semenya is a woman; she has lived her whole life as a woman; her genetics have nothing to do with it. The insistence by the IAAF that she 'prove' she is a woman - as if there were any concrete way of doing such a thing - is sexist on every level.

For the sake of argument, though, let's suppose just for one minute that Semenya does turn out to be XXY or XXX-type intersex, or a person with Androgen Insensitivity syndrome. Suppose that this incredible athlete, who feels that she is a woman, who has spent her entire career competing against women and expresses her triumph as a triumph in the sphere of women's sports, a female and feminine physical feat, happens to be amongst the 0.1% of women without an XX genotype. Why on earth is that a problem? And why should that disqualify her from women's sports? What, are they going to create a special intersex olympics just for her and a handful of others? Or will she be ostracised from the world of sport altogether because her body does not support the binary ideology of the IAAF?

The sporting world is a cultural throwback, as paranoid over the maintenance of strict gender binaries as, well, as your average Greerite radical feminist. But if we truly want to progress as a species - if we want to celebrate sporting acheivement, if we want to strive collectively and individually to run faster and swim stronger and jump higher and think more clearly, our frantic cultural drive to uphold gender as a holy and immutable binary is the first thing we need to abandon.
****
*For more on this and the capitalist connotations of femininity, I heartily recommend the excellent essay Mama Cash: Buying and Selling Genders by Charles Anders, available in several essay collections, although unfortunately I can't find it online!
Posted by Penny Red at 21.8.09