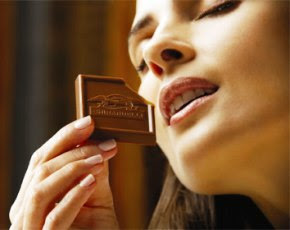 I have a confession to make: I am indifferent to chocolate in all its forms. This makes me abberant as a female, because everyone knows it’s been scientifically proven that all women love chocolate. The presence or promise of chocolate makes us go gooey inside: we melt, simper and attempt to fellate small sticks of foil-wrapped refined carbohydrate whilst a slurpy jazz soundtrack drones in the background.
On Valentine’s Day, the zenith of the candyman’s calendar, we women love chocolate harder and more urgently than usual. Unless a man buys us chocolate, we will weep tears of rejection into our pillows. Even women at the peak of their careers obligingly to confess to craving one thing above everything else: “I just love any excuse to eat chocolate, really…eating chocolate is my whole way of life,” said celebrated actress Anne Hathaway, promoting her forthcoming film, Valentines Day. Forget financial or professional gain; forget personal and emotional fulfilment;w hat every woman truly wants from life and love is a box of cut-price truffles.

“I think there’s a very real sense in which women are supposed to say ‘chocolate’ whenever someone asks them what they want,” writes Dr Nina Power in her recent book, One Dimensional Woman [London: Zero Books, 2009]. “It symbolises a naughty virginity that gets its kicks only from a widely-available mucky cloying substitute…the kind of perky passivity that feminized capitalism just loves to reward with a bubble bath and some crumbly cocoa solids.”

Chocolate is the one form of female desire that is positively sanctioned in the schema of corporate feminine identity. The sickly, sugary stuff is promoted as a legitimate excuse for the expression of pleasure, of selfishness, of lust. Chocolate is ‘sinful’ – but not really. It is explicitly associated with sex, and touted both as an aphrodisiac and as a direct replacement for sexual enjoyment. The inference can be subtle, as in the infamously phallic Flake advertisemets, or the Milk Tray narrative of a lusty adventurer risking life and limb to swoop into a lady’s bedroom with a box of mid-range caramel centres available in any garage. It can also be explicit: a recent survey, helpfully commissioned by Cadbury’s, claimed that 52% of women preferred eating chocolate to having sex. The reason? “Chocolate never disappoints”.

Cadbury’s International Science Director, Paul Hebblethwaite, offered the following rigorous analysis: "It's not just the endorphins -as it melts in the mouth at body temperature, chocolate's creamy texture and unique aroma hit all of the body's senses, heightening the sensuality of the experience." With a chocolate market worth £5billion in the UK alone, it’s surprising that we aren’t constantly dissolving in paroxysms of uncontrollable lust. My own sciencetastic experiments have drawn the conclusion that the brief sugar rush and tacky aftertaste of most commercial chocolate normally leaves one feeling merely a little bit full and a little bit sick.

Chocolate orthodoxy holds that the stuff is emotionally rather than bodily nutritious. Upsettingly large quantities of women self-define as 'chocoholics', and there are even support groups for women who have become physically and psychologically addicted to chocolate - an understandable phenomenon in a culture saturated with messages that chocolate is both a permitted conduit for the expression and acceptance of desire and that rare, precious thing - a way of being kind to yourself.

Being high-calorie, high-fat and almost entirely void of nutritive value, chocolate runs dangerously close to violating the other golden rule of commercial femininity – the imperative to get rid of one’s insulating fat layer at any and, indeed, every cost – but marketing executives have found a solution to this problem. Last Christmas, billboards across the land proclaimed Goodwill to all women : not only was consuming a KitKat Senses the ultimate in chaste, cheeky decadence, at only 165 calories a stick you, madam, could experience the corporate sanctioned female pleasure principle whilst continuing to take up as little space as humanly possible.

All of this heady indulgence comes with a cost. Whilst the Fairtrade movement is gaining currency, almost half the chocolate consumed in the West still comes from Ivory Coast, where child slavery and forced labour on cocoa farms is rife. It is estimated that in Ghana and Ivory coast there are 6.3 million children under 14 working in cocoa production, many of them victims of human trafficking working in brutal conditions. Go on, take a bite, you know you want to.

This Valentine's day, I have asked my boyfriend to exempt himself from the hordes of confused-looking men shambling through Thorntons in search of the key to women’s desires. I'd prefer a conversation to a box of chocolates: what I want from love and life is infinitely more complex and multifarious than a slice of dubiously-sourced, semiotically overloaded candies can provide. On the other hand, maybe I should just shut up and stick a Flake in it.
Posted by Penny Red at 12.2.10