A sad day for British democracy. 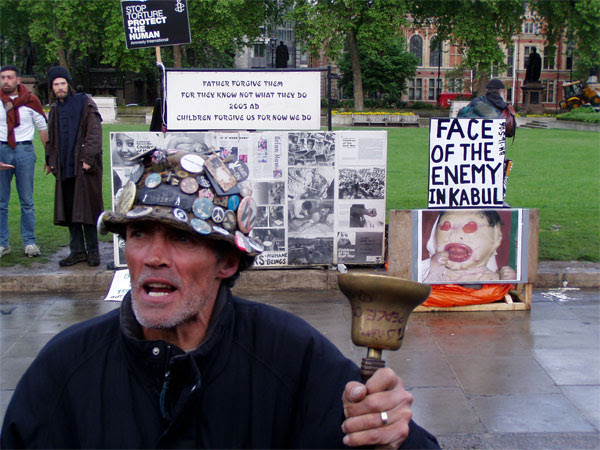 
I'm actually in tears. Boris Johnson, the Tories in Westminster Council and the centre-right coalition have managed to do what nine years of new Labour anti-civil-liberties wrangling didn't have the guts to do. They've sent in the police and they've taken away Brian Haw.

Brian Haw's anti-war protest - a tent, some placards and a whole lot of brazen peacenik courage - has been pitched directly outside the houses of parliament for almost nine years. Embarrassing the executive. Reminding them of their complicity in an illegal war. Reminding the people of the possibility of resistance. Labour tried everything they could think of to get rid of him, dragging him through the courts, even setting up a whole new law to ban protest in parliament square without prior approval specifically designed to oust him. They never could. Under the new centre-right regime, however, there's no such faffing about with legal precedent and squabbling over human rights. Today, the Mayor ordered the stormtroopers in to handcuff Brian Haw and drag him away, and now, after nine years, he's gone.

That's what the right does, in government. No lengthy, drawn-out hypocrytical bollocks about decorum and protest, no legislating you out of existence bit by heartbreaking bit. Just this. You are a nasty protestor. We do not like you, or your messy ideas about justice and freedom. You are spoiling our nice clean lawn. We are sending large men to remove you.

I am twenty-three, and have been politically active for about as long as Brian Haw's protest has been standing. Nearly all of my significant political memories involve Haw, from rainy pickets over the HFE bill in 2008 to cheering as the crowd of nearly two million marched past his tents on the big anti-war demo in 2003, back when I was sixteen and had only just begun to realise how terribly wrong the world was, and the power of personal resistance.

Years later, as a parliamentary intern, I passed Haw's protest every morning and evening as I crossed the street into the Houses of Parliament. And every time, I felt glad to see it, sometimes a lonely one-tent display facing down the glowering edifice of Big Ben and the commons, sometimes a larger gathering, as thousands of well-wishers and supporters travelled from all over the world to meet Brian and join his demonstration. It made me feel proud, every day, to know that whatever faff was going down in parliament, I still lived in a country where citizens had some right to protest, some right to face down the entitlement and warmongering of the state without fear of their lives and livelihoods, even if it was just one little tent and some placards against centuries of privilege and pride. It made me feel proud, every day. Johnson is using the excuse that Haw's protest detracted from the majesty of Parliament Square, but I considered Brian Haw as much a symbol of the political inheritance of my generation as the Commons. And now he's gone.

Some of us on the left were always convinced that the Tories would be worse than Labour on civil liberties. We did say. But today 'I told you so' tastes of nothing but bile. This is a tragedy, a travesty, and nothing more. Mr Haw, we salute you. The state may want to forget your protest and the grassroots resistance it symbolised. We never will.
Posted by Penny Red at 25.5.10

Email ThisBlogThis!Share to TwitterShare to FacebookShare to Pinterest
Labels: a tory is a tory is a tory, Bloody Stupid Johnson, brian haw, cartoon politics and the end of history, civil liberties