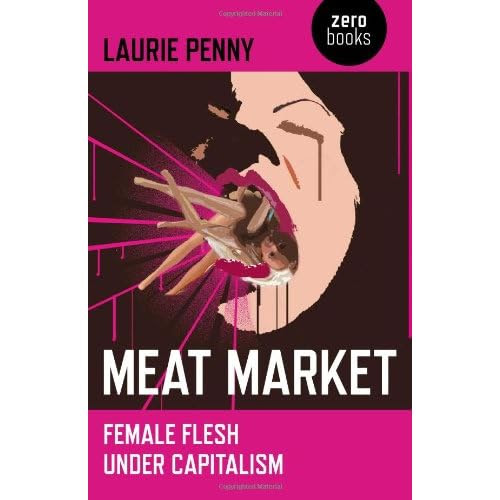 A much-needed holiday, which of course means that I'm running about like a blue-arsed Tory SPAD trying to mop up all the little bits of things I hadn't had time to do for ages. Like some of the legwork on the three books I'm meant to have written and publicised between now and the end of September. I thought I'd drop a quick note about that here, partly to let you all know what's happening, but also because I've got to the stage of sticking my fingers in my ears and humming and pretending it's all not happening, so blogging on it is one way to make sure I actually bloody do it all
So. My book Meat Market: Female Flesh Under Capitalism (Zero Books) is out now. Yay!
I'm also pleased to announced that Pluto Press are publishing a book of my collected columns from 2007-2011, including many from this blog - coming out in October-November this year. Double yay! Last but not least...*drumroll*....
Breaking The Rules, a big book of feminist essays and insurrectionary tactics, is published by Bloomsbury (!) in Spring 2011. This is awesome, not just in the way that a lucky break is awesome, but also in the way that a vast canyon or a huge insurmountable cliff face is awesome. It's due in - all 80,000 words of unsent chapters - in October.
So far, I'm only 1/7 of the way through. *gnaws nails* I've got tons of research, copious notes, and three chapters done, but I haven't actually started the proper writing-without-pause process yet. The very good reasons for this are that even without the book I've been working 70-hour weeks with no days off since May last year, I'm exhausted and overstretched and every day contains thirty other urgent things to do that aren't Write. The. Damn. Book. The very bad reasons, in case you were wondering, are terror, and an encroaching sense that this was all an awful mistake and I can't actually write at all.
Right now I'd give half my laptop for the spare time to settle down and focus. All my professional writing experience so far is living from week to week, column to column, thinking in terms of small 800 word chunks of work rather than vast 80,000 word oceans, so this will be a steep learning curve, especially as I'll be juggling both at once. Does anyone here write books or theses for a living? I'd definitely appreciate some advice!
Posted by Penny Red at 16.5.11