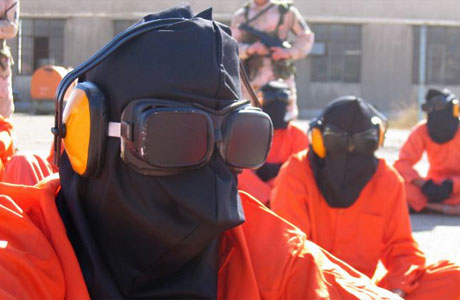 In the words of one of the great philosophers of our age, 'fear of a name increases fear of the thing itself'. (c. Albus Dumbledore, 1997).

An entirely legitimate response to atrocity is to look at the semantics. Today is a significant anniversary: seven years ago, members of minority terrorist sects hijacked some planes and flew them into the World Trade Centre, New York, and into the Pentagon in Washington, D.C, killing themselves and 2,975 innocent civilians in the process, and altering the course of human history forever. Because this atrocity occurred on American soil, it is implicity weighted with more significance and solemnity than any of the many, many atrocities that have occurred since. When we say '9/11' rather than 'the world trade centre attacks in 2001', we collude in affording the event and its victims disproportionate significance, significance that starts to justify the atrocities committed in its name. When we say 'Terror' rather than simply 'terrorism', we acknowledge that the word has silently expanded to encompass anything, anything at all, that the West, led by the USA, happens to be frightened of. And that's quite a lot. The struggle of different nations against terrorism -something that the British are more than resigned to, having had the IRA on our doorstep for the past hundred years - is now being treated as something entirely new, in no small part due to the semantic trickery in which the rhetoric of 'post-9/11' is enmeshed..

The plain fact is that nobody - US citizen, British citizen, Iraqi citizen, French, Japanese or Afghani - has any right to feel safe at all times. This world isn't safe, it will never be safe, not while there are buses on our streets and armed police in our capitals. We have no right to safety, none. We merely have a right to take care of ourselves and our neigbours as best we can, and waging war is generally accepted as a poor method of acheiving said objective. In most countries that aren't the USA, people understand this. But some isolated, cosseted individuals are still of the opinion that suddenly not feeling entirely safe and superior any more gives them the right to have a seven-year temper-tantrum costing millions of lives and billions of dollars.

I can already hear the trolls rumbling under my bridge about tastelessness, so I may as well pick a final nit: the use of the American date convention, '9/11/2001' (rather than 11/09/2001, as it would have been reported in the UK and many other nations) increases the tendency of the event to be historicised from a position which entirely privileges the North American reading of its fallout. And the North American reading is the slow finger-tracing of a frightened toddler. But if we're still going to run cackling with the month/date obfuscation, let's at least have some alternatives. May I suggest:

10/12: on the 12th of October, 2001, the USA and its allies invaded Afghanistan, ostensibly to cature You Know Who. Total Bin Ladens captured: none. Total innocent civilian deaths: at least 3,700 and probably closer to 5,000.

3/20: on the 20th of March, 2003, the USA launched 'Operation Iraqi Freedom' along with its allies in the UK and Australia and help and support from a 'coalition of the willing', consisting of over forty other nations. Total weapons of mass destruction discovered: a few really big rocks. Official body counts estimate that since 3/20, there have been 80,419 to 87,834 civilian deaths (that's 9/11 x 30!), although the true number and names of the innocent dead will never be known.

Today is September the 11th, 2008. Seven years ago today, the towers went down and your world changed forever. Happy anniversary. Everybody do the post-9/11 dance.
Posted by Penny Red at 11.9.08