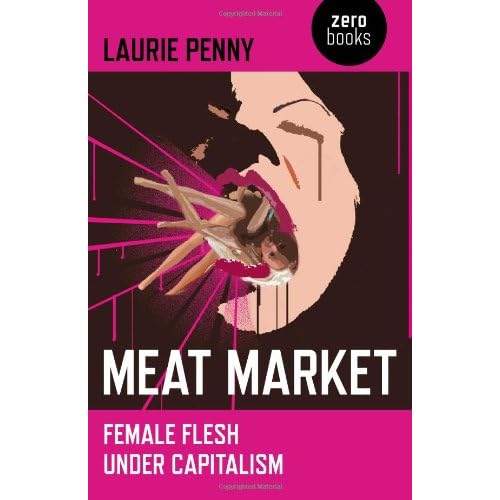 A much-needed holiday, which of course means that I'm running about like a blue-arsed Tory SPAD trying to mop up all the little bits of things I hadn't had time to do for ages. Like some of the legwork on the three books I'm meant to have written and publicised between now and the end of September. I thought I'd drop a quick note about that here, partly to let you all know what's happening, but also because I've got to the stage of sticking my fingers in my ears and humming and pretending it's all not happening, so blogging on it is one way to make sure I actually bloody do it all
So. My book Meat Market: Female Flesh Under Capitalism (Zero Books) is out now. Yay!
I'm also pleased to announced that Pluto Press are publishing a book of my collected columns from 2007-2011, including many from this blog - coming out in October-November this year. Double yay! Last but not least...*drumroll*....
Breaking The Rules, a big book of feminist essays and insurrectionary tactics, is published by Bloomsbury (!) in Spring 2011. This is awesome, not just in the way that a lucky break is awesome, but also in the way that a vast canyon or a huge insurmountable cliff face is awesome. It's due in - all 80,000 words of unsent chapters - in October.
So far, I'm only 1/7 of the way through. *gnaws nails* I've got tons of research, copious notes, and three chapters done, but I haven't actually started the proper writing-without-pause process yet. The very good reasons for this are that even without the book I've been working 70-hour weeks with no days off since May last year, I'm exhausted and overstretched and every day contains thirty other urgent things to do that aren't Write. The. Damn. Book. The very bad reasons, in case you were wondering, are terror, and an encroaching sense that this was all an awful mistake and I can't actually write at all.
Right now I'd give half my laptop for the spare time to settle down and focus. All my professional writing experience so far is living from week to week, column to column, thinking in terms of small 800 word chunks of work rather than vast 80,000 word oceans, so this will be a steep learning curve, especially as I'll be juggling both at once. Does anyone here write books or theses for a living? I'd definitely appreciate some advice!
Posted by Penny Red at 16.5.11 40 comments:

From persuasion to coercion...

I wrote about UKUncut, the intimidation of protesters, and what that says about the government's confidence in its own spending plans, in the Independent today. Read it here.
Posted by Penny Red at 9.5.11 24 comments:

I can't help but notice that it seems to be the fashion nowadays to up one's blog hits by writing random, ad-feminam 'let's hate on Laurie Penny' posts. My response to today's 'in defence of' post by Rumbold at Pickled Politics says basically all I want to say on the subject of attention-seeking, stalky haterz. The first bit is a response to a claim that, because I wrote about being hit by a bit of fence thrown by some protestors AND by a copper on the 26th of March, I must have fabricated my entire report on the TUC demos.

Underflow at 9: I maintain that what I wrote about March 26 was the absolute truth. I was hit by a flying piece of fence that some protesters threw at the police AND by a police shield that day. It’s hardly uncontradictory, I was in the middle of a big fuckoff police battle and, as a reporter, I was unable to pick up anything to defend myself. You can choose not to believe it if you wish, but I am a journalist and I tell the truth. Sorry if that truth makes you uncomfortable.

As for the comment at 3 on asking why I don’t choose to respond to every single carping, bitching ad hominem directed against me – I simply can’t be bothered to engage with mindless personal attacks. I have no particular duty to do so. I have written (and you can find on my blog) all I wish to say about privilege, ‘romantic’ writing, the difference between narrative and fiction, etc, etc – questions that have been raised with me by readers whose respectful critiques I respect in turn.

I know, most of my readers know, and my friends know that I try to be a principled, honest and good-hearted professional with a deep understanding of the ways that class, gender and race intersect with my writing. I don’t have to respond to every crabby little troll to address those issues.

The posts you link to, far from being ‘accurate’, are snide, pissy, poorly-written personal attacks. They’re the blog equivalent of calling someone up, heavy-breathing at them down the phone for a while and then getting enraged when they don’t respond. If people want to see me as a cartoon punching-bag, then fine, but they can hardly get pissy at me for refusing to respond to their childish rants. I have far, far more important things to do.

To which I would add: it's BORING. Every five minutes I spend responding to some random dick-swinging troll on the internet is five minutes not spent researching the legitimacy of international adoption, or working on my book, or answering emails, or reading journals, or going to solidarity meetings, or snatching the occasional bit of downtime, or doing the washing up, or digging little bits of fluff out of my belly button, all of which are activities more deserving of my immediate attention than a small tribe of bitchy online hate-weasels.

I do not believe that, by being young, female and/or opinionated in public, anyone is ever 'asking' for the hateful, poisonous rape threats and death threats that I regularly receive, as do many other women and lefties who write online, especially if we have the temerity to be feminists. [[On the misogyny and rape-bombing question, Cath Elliott's post 'An Occupational Hazard' is a must-read.]] Even if I'd run out of things to say, even if I felt that ceasing to write were any more feasible an option for me than ceasing to breathe, I would probably carry on writing and reporting simply out of a wish to refuse to allow misogynist reactionaries shriek and scream the feminist left off the internet. As it happens, there is more to say. And a pile of important work to do, which I should get on with now.

Thanks to those who have written and blogged in support during the various rapebombing and hatestorms. It makes a huge, huge difference. hashtag-Solidarity.