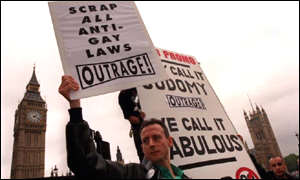 So now the Tories are courting the pink vote. Big surprise. But the notion, promoted even by the BBC, that gays might have a 'duty' to vote Conservative is baffling.
They've wheeled out Margot James, PPC for Stourbridge and noted deep-blue dyke, to tell us all why we need to vote Tory. This is the same Margot James who did not stand as a gay candidate at the last election, and who has been heard saying that she hoped her partner's name, Jay, would be mistaken for that of a man by reporters. Ms James' parroting of the party-line at the Stonewall event yesterday goes something like this:

"Gay people are net contributors to public services through their taxes, because very few of them have children.

"I think gay people have got more angst on this issue than anybody else because gay people are paying in, through their taxes and actually using far less of the NHS because they tend not to have families, less of the education system for the same reason and all the more reason to be angry with this government for the waste of their taxes."

Translation: "Everyone knows you faggots hate kids! So vote for us - we hate kids, too!'

The suggestion that homosexuals do not have 'families' is both degrading and manifestly false. I happen to live in a massive multi-sexual household of six. None of us are related by blood, but we consider ourselves family. All of us, furthermore, have mothers, fathers, brothers and sisters and all of us feel that - despite our sexuality - we are just as invested in other humans as anybody else. Me and my big queer family are appalled by this throwaway rhetoric, at a Stonewall event, no less.

The logic of the tory tax argument also falls down when the ageing society is brought into play. Sure, homosexuals may, on average, raise fewer sproglets than their het friends, but this makes it all the more important for us that we live in a society that invests properly in healthcare, elderly care and the pensions system. Without the dubious surity of grown-up kids to wipe our octogenarian posteriors, we are going to need a government that invests in our care - a government that values the contribution we make as members of society enough to make public spending a priority.

The main tory line, however, remains that you and I should vote Conservative because, well, there are quite a lot of gay conservatives. Newsflash: there have always been gay tories; there have been gay tories before the word was even invented. What there have never been are tories promoting a gay agenda. In recent years, tory MPs have, for the most part, had an appalling voting record on queer issues in parliament - vital issues like civil partnerships and the age of consent. The tories are quite happy for us to carry on shuffling in the dark. If they're gay, too, they certainly haven't traditionally wanted the world to know about it. The tory closet door remains firmly shut. And no wonder, this being the party that introduced and tried desperately to save Section 28 of the Local Government Act, 1988.

Just a reminder: the amendment stated that a local authority "shall not intentionally promote homosexuality or publish material with the intention of promoting homosexuality" or "promote the teaching in any maintained school of the acceptability of homosexuality as a pretended family relationship". Ian Duncan Smith and a great deal of the tory party faithful spent 2003 trying to save this disgustingly homophobic piece of legislation. Nobody has apologised for that, and the silence of top conservatives over their shocking record at the Stonewall event stunk of hypocrisy.

I am not suggesting that just because you like a bit of same-sex action you absolutely must be a political radical. Not at all. Not one jot. In fact, I'm grudgingly of the opinion that one thing the 1990s were good for was freeing gay men and women of the grinding obligation not to also be bigoted fuckwits if they so chose. But bigotry and a forward-thinking queer agenda have never gone hand in hand, and if one is queer - not just gay, which is a statement of fact, but politically queer - you do have a duty to vote for anyone else apart from the tory party and far right.

Queer politics involve more than a private penchant for cock and a public rhetoric of tax breaks for straight, married couples. Queer politics are politics which make it easier for the millions of men and women who choose to live and love outside of the heteronormative box to do so without cultural, practical or financial discrimination. Queer politics are inherently radical, and not everyone working towards them is gay, and not everyone gay has queer politics. Let's not mistake gay - which is what the Conservative party has always secretly been - for queer, which it never will be.
Posted by Penny Red at 1.10.08