Britney and the Bedlamites: for Red Pepper 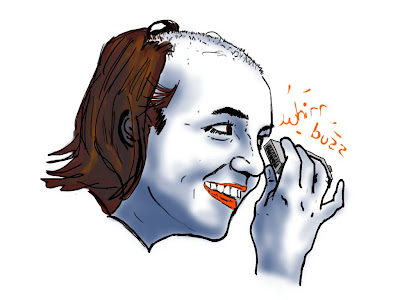 I've just got back from an internet activists' conference, which was all kinds of shiny. I shouted at Anonymous, who both looked and talked like rapists in their oh-so-scary masks, when they tried to explain me why they had a policy of using the term 'cumdumpster' to describe women. 'It's offensive. So it's funny. It's funny because it's offensive, yeah?'

Dear pointless cigar-smoking prick: you're an idiot. You ain't Rorsharch and if you were I'd still be laughing at you, not with you. Grow up, show us your bloody face and learn that bullying and activism do not equate.

Anyway. The following article was written for Red Pepper, but got elbowed out of the current issue. It's still going to be a great issue, and you should all buy it, but here, for your special Saturday night pleasure, a Penny Red exclusive: Britney and the Bedlamites.

The lunacy and redemption of Britney Jean Spears is a contemporary hagiography. The former teen pop sensation's appearance at the 2009 MTV awards, apparently sober, well-groomed and grinning like the waxwork which Mme Tussauds created to commemorate the event, signalled a return not only to health, but to virtue. Once again, Britney looks like all little girls are encouraged to grow up to look: pretty, compliant, obediently performative - the first signals of good mental health for women in and out of the public eye. The fact that the singer's very real and very chronic mental health problems cannot be cured with a decent spray-tan and hilights is irrelevant to the international celebrity press: in the eyes of the public, Britney Spears has been redeemed.

Two years earlier, Spears had shaved her head in an LA hairdressers’, and tabloids across the world screeched that the singer had lost her mind. The event catalysed a burgeoning fetish for feminine neurosis in Western pop culture, a fetish which seems to have achieved its squalid climax in the public ‘healing’ of Britney Spears, Amy Winehouse and their ilk. Open any magazine, turn on any tv station, and the message remains the same: women who are successful, or who don’t know their place, will go mad, and will require healing.

It's nothing new for women to be labelled insane if they display behaviour that diverges from received feminine norms of submissiveness, sexual and social discretion, purity and humility, and in today’s culture the trend is no different: bad-boy rockers are cool, racy ‘troublemakers’, whereas bad-girl rockers are ‘troubled’, and need to be saved from themselves. Self-destruction has always been part of rock and roll, but when it comes to male artists, their suffering is invariably portrayed as far less important than their genius, or even as an unfortunate, necessary part of it. Think of Jim Morrison. Think of Hendrix. Think of Kurt Cobain. Think of Heath Ledger, who has just got his very-much deserved posthumous Oscar for that screwy-beautiful performance in Dark Knight.

But the double standard kicks in when we remember Sylvia Plath, Marilyn Monroe, Britney, Amy and Kerry for their illness more than their art. All of these women suffered or suffer from bipolar disorder (manic depression) – a very real medical problem which affects about 1% of the adult population, and a significant percentage of creative, dynamic and high-achieving people - but it is women in the public eye who are defined, ane morally judged, on the basis of their mental health.

Female artists, with or without emotional problems, are treated not as suffering geniuses but as silly little girls who aren’t bright enough or mature enough to take care of themselves. On the pages of newspapers and magazines and websites across the country, women’s minds and especially women’s bodies are poked, prodded, pinched and squeezed like livestock at a cattle market, their flesh weighed and labelled and stretched on the slab of media scrutiny – and now it’s claimed to be for their own good. A pound lost or gained from the backside of a A-list artist is taken as evidence of impending breakdown, and whatever successes they may or may not attain is deemed futile if the papers declare that they are cracking under the stress, binge-artists, secret alcoholics or, worst of all, ‘starving for attention’.

The fantasy is seductive. In a Western world that still fosters a deep suspicion of successful women, the myth of feminine neurosis gives armchair misogynists of both sexes a happy explanation for the fact that unprecedented numbers of women are reaching the top of their game in the media and the arts. It’s reassuring to be reminded that women are fragile and flawed. It’s reassuring to be reminded that girls are deranged, deviant creatures who can’t cope with pressure. But we’ve seen all this before.

In the 19th century, women were deemed highly susceptible to becoming mentally ill, as they were seen to lack the mental fortitude of men; contemporary medical theory spoke of the uterus as a sponge that wandered around the body, sucking out the juices of reason, leading to ‘hysteria’. If they dared to enjoy sex they were deemed ‘nymphomaniac’, a disease treatable by solitary confinement, leeches and clitorectomy; if they were lesbians or chose to remain unmarried, they were ‘frigid’. The risk of insanity greatly increased if any woman attempted to better herself through education, work or too many activities. Many women, especially in the upper- and upper-middle classes, learned to suppress emotions for fear of being labelled as mad and sent to an asylum or confined to their rooms, a phenomenon vividly recounted in Charlotte Perkins Gilman’s 1892 story ‘The Yellow Wallpaper’.

In today’s supposedly progressive culture, women are still threatened with the spectre of being deemed insane if their behaviour deviates from socially circumscribed norms. On the cover of every magazine, young women are reminded of what happens if we let go of self-control: we will become fat and powerless and unloved, grotesque, overconsuming, stumbling out of taxis way past our bedtimes, flashing our knickerless crotches at unsuspecting paparazzi and returning home to grind what’s left of modern morals into a fine powder and stuff it up our disintegrating post-feminist nostrils. But the spectre of young women’s imagined loss of control both as mental illness and as cipher for social degeneration is a long established and tediously familiar one, echoing Hogarth’s ‘Gin Lane’ paintings of the 18th century. As early as 1712, the Spectator made explicit links between a number of ‘addictive’ substances and their dangerous effects on the female mind, warning its ‘fair Readers to be in a particular manner careful how they meddle with Chocolate, Novels and the like Inflamers; which I look upon as very dangerous to be made use of during this Carnival of Nature’.

Fast-forward three hundred years and success, emancipation or simple pleasure still gravely endangers the mental health of Britain’s female icons, out on the lash and the combined pill, vomiting helplessly into the gutters of modern decency as the distinction between mental illness and plain misbehaving becomes ever more irrelevant to the feminine equation.

Britney Spears’ very public breakdown in 2007-8 was a crucial flashpoint. Preened for stardom since babyhood, young Ms Spears spent a lifetime being pumped up, dolled up, sexed up and shoved onto every waiting stage: her first relationships and developing body were devoured by press attention, but despite the pressure and public scrutiny she somehow managed to produce four very fine studio albums, all of which were chart-toppers. When she finally began to show the strain, the outcry was instantaneous and horrific. The singer, who was a Rolling Stone cover girl at sixteen, began to be regularly caught out by the papparazi in the ultimate act of extreme insanity for a woman in the public eye: the consumption of a hamburger and fries. Eventually, Spears recreated with a borrowed buzz-cutter an act that has for centuries represented the supreme rejection of social feminisation, and hence the supreme demonstration of ‘insanity’. Plastic Britney dolls had been available since the singer turned seventeen; before long you could pick up bald ‘Britney Shears’ dollies, complete with tortured plastic grimaces and miniature straight-jackets.

This isn't the fourteenth century, and mental health is not a moral judgement. Britney's bipolar disorder is an ongoing medical condition - it isn't a moral lapse that can be purged as long as the sinner confesses the error of her ways to enough celebrity magazines and vows never to eat chips again. To imply otherwise is to do an extreme injustice to the millions of people across the world who are touched by mental ill health, as well as to slide into lazy misogyny: the idea that the mentally unwell and women in the public eye can be 'redeemed' with the right haircut and the right lighting is an insult on both fronts.

Women, including those of us with mental health difficulties, are socially and morally whole human beings, who do not require redeeming. What we require is respect; and we're coming to claim it. Squeal all the papers might, they cannot stop a new generation of female artists, singers, musicians, models, actors, writers and photographers hammering on the doors of privilege. These women want it all - fame, family, creative and personal fulfilment and oodles of cash - even if they have to get it whilst managing a mental health condition, as one in four of us do. Despite the bar of acceptable behaviour being set far higher for females in the arts and the media, despite flocks of paparazzi picking over their bodies like carrion birds after a battle, despite their every artistic, social and sexual transgression being seized on as evidence of blind insanity, the inheritors of 21st century pop culture are coming up punching, in control of their lives, their minds and their message, even if the message isn’t what patriarchal society had in mind.

I hope you enjoyed that, my dears. Now, I'm going out to a sweaty goth club to drink cider and black and swish around like a fool. Y'all have a good one.