Catastrophe Princesses and other mythical beasts.. 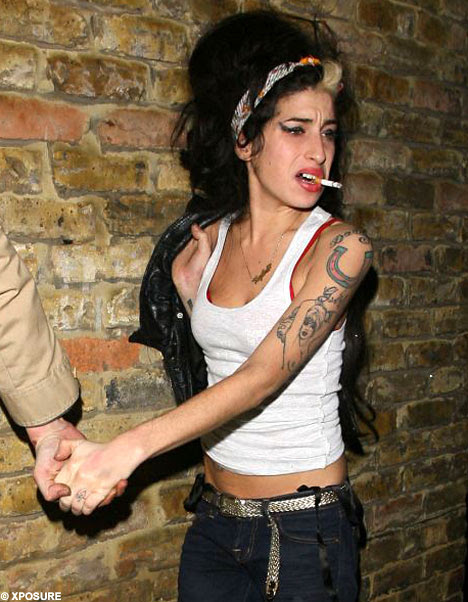 Today, Tanya Gold in the Guardian has an interesting take on why so many young women are boozing, shagging around and otherwise checking into rehab wired on cocaine and existential terror: apparently it's celebrity magazines driving us, like so many jimmy-choo'ed lemmings, over the edge of sanity.

In this article, as has been smeared over the covers of every Metro and Reveal for the past twelve months, Britney Spears, Amy 'Wino' Winehouse and other Catastrophe Princesses are wheeled or stretchered out for our scrutiny, evidence of a 'burgeoning trend..of mental illness' amongst young women in the West.

Ms Gold is a high-acheiving woman from a 'nice' family, neither of which preclude her from being shockingly unhappy - I should know, I'm one too. Yes, Gold is in the process of kicking the booze: well done her. So all this sanctimonous twaddle about celebrity culture and size (ugh) zero can't just be an attempt to cash in on a personal sob-story by jumping on the celebrity bandwagon - can it?
Of course not. It's simple, really. The pressure of being a woman in a culture that demands more of you than you can possibly give, the impulse to lash out against the imperfect self, all of this could be solved if we simply switched off the telly and stopped buying Cosmo. After all, girls are so fragile and impressionable that their brittle little brains will break under more than a small amount of pressure to look like Victoria Beckham. Tanya Gold's article plays into the dominant celebrity fantasy of the zeitgeist: that women - especially successful women, and especially beautiful, successful young women - are not strong enough to cope with the pressures of modern living without having their heads confiscated and their children shaved and being stretchered off to Rehab like poor Britney Spears.

In some respects, of course, Gold may have a point. There have been many afternoons, in that black and bile-encrusted teatime of the soul, when I've come to on the carpet, my DMs full of vomit, with an HIV-positive transsexual schoolgirl from southend mopping up the bloodstains on my arms and legs with a copy of The Complete Nietzsche, when I've thought to myself, 'why can't I be more like Cheryl Cole?'

And yes, there have been times, practising Kuburi rope bondage on a rooftop in Haringay with otherwise well-behaved undergraduates from respectable homes, snorting Ketamine off the shrivelled genitals of today's misspent youth and screaming my latest psychotic break to the sky whilst listening to the music of My Chemical Romance, that I've wept for the latest puffball dress or bikini waxing treatment....

There have been nights, getting my nipples pierced by illegal immigrants in Soho, five fags clamped between my teeth, tripping my tits off on a ground-up-and-snorted copy of Heat magazine, that I've wished that I had the figure of Geri Halliwell or the address book of Jade Goody....

And often I've staggered home from binge-drinking in terrible pubs with my pinko commie bisexual friends, mainlining raspberry flirtinis and gang-raping local members of the landed middle-classes with copies of The Socialist Worker, only to bleed my expensively educated brains away in front of Big Brother 18: Stripper Slaughter Nightmare, and on waking to find the words 'what went wrong?' tattoed into my forearms with a blunt stanley knife, I've wondered...what went wrong?

Tell me something I don't know, Tanya, and tell it to me without anodine celebrity name-dropping. Tell me what it's like to be a young (or not so young) woman growing up in a world that wants too much of you.

We are infinitely more fucked up than you realise, and infinitely more in control than the trim-taglined world of 'grown-up' journalism can understand or countenance. We are not catastrophe princesses, fragile and beautiful, living in towers of stacked magazines and slimming guides, waiting to be rescued. You do us a disservice by reducing us to our drinking habits, our eating disorders, and any crushes on Russell Brand we may or may not entertain.

Young women in the West are not as delicate and broken as, perhaps, you would have us be. We may be in the gutter, but we're not just looking at the stars and longing for escape: we're wiping our lips and coming up punching.
Posted by Penny Red at 31.1.08