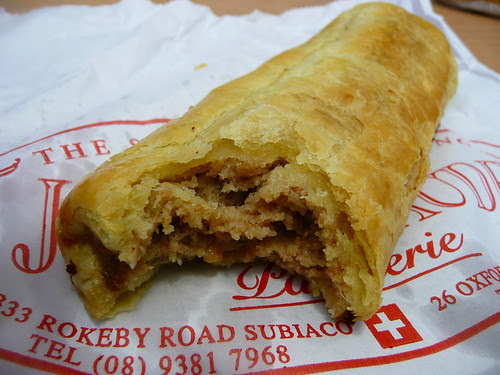 I've just got back from stewarding at the Fabian Society Conference, 'Fairness doesn't happen by chance', tickets fairly priced at £30, which is why I was stewarding. As soon as I saw the title of Secretary James Purnell's keynote debate - 'SOLIDARITY LOST? Reviving the will to re-distribute' - I got an intense and heady craving for a sausage roll. A cigarette. A hard slap in the face. Anything, actually, to reassure me that the life I'm living has some connection to reality. The Welfare Reform Bill may be a hundred and nine pages' worth of suspicious gibberish and the debate that followed was vaguer and more dubious still, but you always know where you are with a sausage roll.
After some initial platitudes - 'What is solidarity? Well, I'd say it's kindness transformed into political reality...' - the Work and Pensions Secretary got down to the meat and bone of what he has in mind for the nation's poor. Apparently, 'passive redistribution' - the worn, outdated notion of actually transferring money from one group of people to another - simply isn't 'modern' any more. 'We need to move from the concept of passive redistribution to one of active redistribution-increasing aspiration, education and opportunities'. Not thirty seconds before, Purnell himself had noted that aspiration, education and opportunities are accurately predicted by parental and personal income - but apparently financial redistribution is still just a bit too last century, not to mention expensive.

Onto welfare reform. Purnell's new Welfare Reform Bill contains nothing whatsoever about actually spreading wealth around (I've read it. Twice) and a great deal of sops to an imagined Daily Mail readership - and this is cheerily deliberate. 'I think politicians need to respond to public opinion,' Purnell said. And yes, that's commendable, and that would be fine if there were real research into public opinion behind this Bill, but trouble is that the Mail does not, in fact, reflect public opinion so much as create it - which begs the question of why it's this particular piece of 'public opinion' to which the Brown administration has decided to buck a ten-year trend and pay some attention, a question which was left dissolutely dangling.

The rest of the debate meandered over issues of what the left really mean, what they really mean by the concept of fairness, and was ultimately hijacked by a worthy but somewhat off-topic immigration conversation between Trevor Philips of the ECHRC and Yasmin Alibhai-Brown, much to Purnell's beaming relief. Brown was right, but the extent and detail of her rightness conveniently allowed the entire discussion to abandon all hope of actually addressing actual redistribution actually at all, which nobody had seemed very keen to do in the first place anyway.

So I put up my little ink-blotted hand and flapped ineffectually at the air for twenty minutes, until I realised that no, the chair was not going to take my question, because he'd met me. And after realising this, I waited for a pause in the proceedings, and stood up and said it.

''So, Mr Purnell, is there actually going to be any increase in financial redistribution, or not?''

So when the legitimate questions had finished, I stood in front of the Secretary of State for Work and Pensions, and said,

''Mr Purnell. In this Welfare Reform Bill, a copy of which I have here *brandish*, you have this week suggested that you're going to impel long-term benefits claimants to work for large companies, which you're going to sub-contract at public expense, and you're going to pay those workers under half the minimum wage, and pay the difference to the companies, companies that include the US mega-firm Wal-Mart. Is that correct? And is it just?''

No, James. No, that's not the question at all.

A lot of things work, and a lot more things work for a little while. Fascist regimes, for example. Or cleaning your teeth with bleach. Or crash-dieting. The question is, is it fair? Is it right? And is it going to create a stabler and more functional society, as opposed to a dazzlingly unequal corporate archipelago? Unless the answer to all of these questions is 'yes', does it work doesn't come into it - not before you know precisely what it is you're trying to acheive.

''A lot of people would be happy to stack shelves for Wal-Mart, if they were given the opportunity to do it for a living wage. What do you say to that?''

''Well - yes, but we couldn't do that for everyone who was unemployed for even a day, could we?''

Purnell glared at me, and put on his long, black, expensive-looking coat in a looming-looking way. I, however, am under five feet tall. I'm used to looming. I was not impressed. I remain unimpressed. And as the Bill proceeds through the House in the teeth of a recession, we can only hope that a few stalwart Westminster souls still believe in redistribution - because the Labour's figureheads certainly don't.

If you're feeling a little chilly inside right now, you might want to take a look at this reassuring picture of a very tasty and wholly predictable sausage roll, and possibly go and eat one. I know I shall. There, don't say I never have any practical solutions.
Posted by Penny Red at 17.1.09