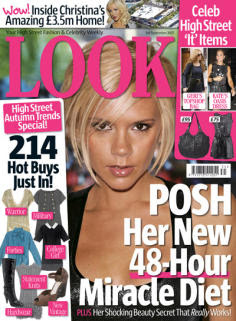 So. My whole head is pounding full of rotting green goo and it feels like someone's shoving a tiny scalpel into my larynx every time I cough. Which is fairly often. I'm home from work sick, and not for the first time I find myself trawling websites dedicated to skinny porn - the reams and reams of bollocks about dieting, eating disorders and (ugh) thinspiration out there on the web.
This is the equivalent of the recovered alcoholic's bottle of gin in the desk drawer - something between a temptation and a safety valve, a reminder that I could always go back there if things got bad enough. And oddly, one of the few times it strikes hard is when I'm really godawfully ill or exhausted, when the desire to control my leakily misbehaving body somehow seems more prescient.

I think that in my most fragile times I will never truly be free of the desire to control myself, to diminish myself - an impulse which, even for the many male sufferers from eating disorders, is always acutely feminised. The first aim is to escape gender, the second - paradoxically - to exaggerate it, by becoming the ultimate self-denying, self-diminishing, passive, body-oriented good girl, but such a very very good girl that you end up being a bad girl. Everyone I've ever met who’s been there- and that's a lot of people, you come to recognise a certain look in the eyes - in some way has elements of both, and even for me, a frantic crew-cut teen androgyne who desperately didn't want to be a 'proper' girl, there was a playful element of paradoxical rebellion in the not-eating, the excessive exercising, that pleased me. Being a real girl meant dieting, exercising, focusing on your appearance, not talking back, not shouting too loud, being submissive, caring less about your grades than how you looked. Anorexia proved to me that I could take on that game, and I could win - I could be the thinnest, the most obsessive, the sickest of all, and I could do all that and throw it all back in their faces, show them how sick it was, how wrong it all was, how it gnawed away at the very brain and bone of me.

Sasha Garwood – professional expert, former sufferer and personal friend– explains that 'any woman starving herself is simply manifesting the dictates inherent in conventional cultural concepts of acceptable femininity that she's been absorbing almost since birth and taking them to their logical extreme. There's a perverse and often defiant logic involved - to be good enough I must be thin, quiet, accommodating, not take from the world - well, I'm so much worse than everyone knows, so if I take it further than anybody else, will I be good enough? Ever?’

Did you know that in circumstances of prolonged starvation, the human brain actually shrinks? It is a fact far from universally acknowledged that dieting makes you stupid. For three years of a literature degree, I couldn't concentrate enough even to read a goddamn book, I fretted about my schoolwork to the extent of handing in meticulously checked, book-long essays about once every couple of months. Unless you've been very hungry for a long time yourself, you can't imagine what prolonged malnutrition does to your mind - never mind how obsessive you started off, you'll soon start thinking in tiny repetitive circles about everything. You’ll become anxious, tearful, constantly on edge, and this is an evolved reaction - in response to what it perceives as famine, the lizard-brain becomes hyper-focused, wanting you to stay awake searching for something, anything, to eat. Little habits, distractions - smoking, gum-chewing, booze, caffeine, uppers- become addictions. You can't sit still, you can't concentrate. You become angry, irrational, paranoid, fearful. In betweentimes, you feel hopeless – like nothing good will ever happen again. You can feel your thoughts moving more slowly, like in those dreams when you’re running through thick sludge away from some nameless terror. And all of this has nothing to do with being an actual crazy lady – these are the physiological effects of prolonged starvation.

Don’t just take my word for it. The Keys Study, also known as the Minnesota Semi-Starvation Study – carried out in 1944, it’d almost certainly be illegal now – found that a group of thirty robust, mentally well male volunteers all displayed these exact symptoms when systematically deprived of nutrition – from depression, to paranoia, to obsession with weight and appearance and hoarding behaviours, to psychosis and suicide attempts in the most extreme cases. Some of the volunteers never fully recovered from the experience.

What bites – figuratively speaking - is that millions of women, as well as some men, are putting themselves through this every day. Hating and wanting to contain your own femaleness isn’t enough – the campaign of weight against the female body across the developed and developing world actually does make us stupid, and disturbed, and obsessive, and small-minded. It’s personally and politically deadening in every sense of the world. And we’re taught to do it from an extremely early age, if not by our parents and guardians then by our classmates, by our culture. As ever, Naomi Wolf says it best:

"The ideology of semistarvation undoes feminism; what happens to women's bodies happens to our minds. If women's bodies are and have always been wrong whereas men's are right, then women are wrong and men are right. Where feminism taught woman to put higher value on ourselves, hunger teaches us how to erode our self-esteem. If a woman can be made to say, 'I hate my fat thighs,' it is a way she has been made to hate femaleness. A cultural fixation on female thinness is not an obsession about female beauty but about female obedience.” (‘The Beauty Myth’, 1991).

"female hunger-for public power, for independence, for sexual gratification- must be contained, and the public space that women be allowed to take up be circumscribed, limited... On the body of the anorexic woman such rules are grimly and deeply etched"

For me, feminism has been the hammer with which I’ve smashed my way to wellness. Forcing myself to understand my own self-worth as a person even if I didn’t really believe in it was not just a passing political fad, it was a survival skill. It was absolutely essential, if I were ever to stop being stunned and stupefied by my own terror of loss of control, my terror at the raw fact of my messy, imperfect body, that I regain the feminism I’d lost as a teenager. Make no mistake, I cut my teeth on Germaine Greer and Betty Friedan; not because anyone told me to, but because I was drawn to the power and iconoclasm of their thought. The only point in my life when I haven’t been a feminist has been in the depths of my eating disorder, when I truly hated everything that wasn’t masculine and regimented and tamed, myself most of all.

I am not suggesting that eating disorders, body obsession, dysmorphic disorders and the colossal, dulling time-wastage we are forced to put into ‘grooming’ is the very worst thing that happens to women anywhere in the world. I am not suggesting that we have it as bad as women in cultures where females are forcibly circumcised, married off young and denied education and medical treatment. But the perverse and pervasive rhetoric of thinness, personal beauty and self-control is a point on the same spectrum for women in the west. It is an enforced surrendering of personal power – shame and obedience forcibly enacted on the body in the cruellest and most insulting of ways. (Follow the link to TheFWord for more of me theorising about 'the invisible corset')
Posted by Penny Red at 29.1.09

Email ThisBlogThis!Share to TwitterShare to FacebookShare to Pinterest
Labels: eating disorders, feminism, the personal is political