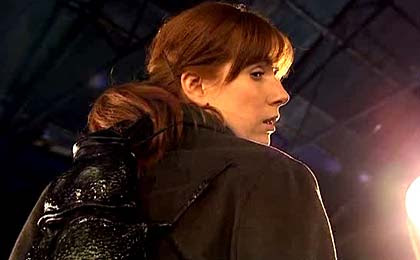 There are only so many ways round you can ask 'what does it mean to be of the Left in Britain today?' before you start to sound like Yoda in the small hours of a party conference booze-up. Nonetheless, yesterday's launch of Demos' new Open Left project, spearheaded by James Purnell, threw up some very interesting points.
Purnell believes that left ideology necessitates 'choice in public services', which is a tad rich coming from the man who single-handedly purged the welfare state of its last remaining shreds of compassion earlier this year with his intricate schemes for lie detector tests, workfare-style sickpay deals and a punitive scheme for addicts and alcoholics. Will Hutton, fashionably late as always, talked a great deal about the language of fairness and 'just deserts'. The tone of the debate was consistently philosophical, which is absolutely fine when debate is also inclusive - but the elephant in the room was its narrow field of vision.

Purnell opened his talk by declaring that he had been refreshed, since leaving the cabinet, by the expansive vision and energy in the wide, wide political world of....thinktanks! I listened for the sniggers, but there weren't any. And looking around I saw why: in a roomful of 100 people meant to be talking about the future of the left, there were precisely no activists and nobody who looked like they'd ever spent time on state benefits. There were, however, plenty of Guardian journalists, a lot of folks from Demos and the Fabian Society and five - five! - people I personally knew from Oxford university. So where were the have-nots in the debate? Surely it was their conversation to have as much as anyone else?

I stood up to explain that I was living in a household of young people with the bad luck to be unemployed and suffering from chronic health problems, and that whilst the panel was equivocating over the real meaning of fairness most of us were lucky if we could afford one meal a day. I asked the room why we were not talking with and about the people suffering most in society today. I asked the room how many people there present had been unemployed for long periods, or had ever worked for the minimum wage, or had not been to a top university. By this point I was so angry that I properly started shaking. People came up to me afterwards to congratulate me rather patronisingly on my 'passion'. Why? Had they spent so long in think-tank land that they'd forgotten what an actual angry person looks like?

This, surely, is at the heart of the dilemma. Labour was established in 1900 as a party to represent the interests of the working class, but the urban and industrial working class as it was between 1790 and 1980 no longer exists. The large swathe of people working low-paid jobs in industry who gave the Labour party its name and its purpose no longer exist as a block with a unified purpose of reasserting control of the means and rewards of production. But there are still many millions of people in Britain who are poor, disadvantaged and subject to what Purnell called "arbitrary authority". If Labour isn't the party for those people, then what on earth is it?

John Cruddas pointed out that the Labour Party "has lost because we've embraced a neoliberalism which is brutal and individualist". The notion of collective good has been lost. Collective good is at the heart of what it means to be of the Left, and central to its instigation is, in Cruddas' words, "a notion of socialism, which is important to retain, whereby we preserve and nurture forms of interdependence and solidarity." In layman's terms: being of the Left is more even than the utopianism, the statism and the egalitarianism that Purnell lays out in his LabourList article today. Being of the left is about materially supporting, practically helping and politically including those less advantaged than ourselves, because we share a common humanity.

The labouring classes of today don't work in mines anymore. They work in callcentres, care homes, shops and hospitals; they are women as well as men, black and asian as well as white; they are single parents, the mentally ill, the sick and the unemployed, scrambling for a living in hard times; and they need a party that represents their interests just as badly as the factory workers and miners of the 1900s did. If it wants to survive at all, Labour needs to step outside the think tank bubble and ask not how the disadvantaged fit its agenda, but how it can best serve them.

Because if someone doesn't start coming up with answers soon, as Cruddas, Will Hutton and neophyte Lewis Imu pointed out, then extremist groups like the BNP will step in to fill that gap. In the last elections 900,000 people voted for the BNP, most of them from poor and disadvantaged communities, because no other party in Britain today is even bothering to consider what people on low incomes or no incomes, people living in the teeth of the downturn, really care about. Unless Labour can relearn that language, then the party is finished. And if the Left doesn't rediscover its social conscience double sharpish, we may as well all go home.

GEEK POINTS: The first person who can tell me why the picture above has been chosen to illustrate this post wins a hundred shiny geek points and a fabulous prize that I will invent later.
Posted by Penny Red at 21.7.09