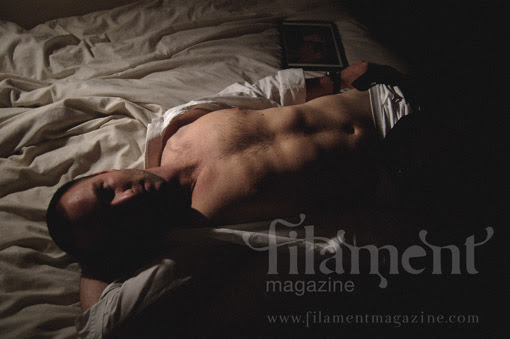 The past week I've been absent, alternating work with frantic end-of-tenancy cleaning of a house in exactly the state you'd expect after eighteen months of sheltering six extremely depressed precariously employed young people and Neets let down by the government and the economy, surviving on a pittance, on which more later. I have bleach poisoning, and possibly also vial's disease. But right now I have half an hour free, waiting for my small sister to arrive so I can show her the bright lights of London; so I thought I'd point any of you who haven't seen in the direction of Filament magazine.
Filament is a fantastic project, set up by Suraya Sidhu Singh, a multi-talented friend of mine. It's a magazine designed to show erotic images of men that please women, as a counter to the market saturation of male-gaze-oriented images of women, with the assumption that women are actually allowed to have desire of their own, rather than just being the objects of it. So far, so uncontroversial, right? Wrong!

Filament has been in the press recently after Comment Is Free decided to run with the story about how their publishers refused to print tasteful images of an erect penis, deeming them 'offensive' in a culture awash with soft- to hardcore images of breasts and fannies selling everything from porn to purifying facial wash. The extreme controversy and popularity of the article may have something to do with the fact that it's all about knobs (knobs! In the shops!) and has an erection pun in its title. But the piece and the comments are both worth a read if you've ever been interested in the sexual double standard - the same sexual double standard that you, right now, have a chance to do a little something to lessen by supporting Filament. Get ready, here comes the whorebaggery:

To stay in print, Filament needs you to buy an issue, or even, which you can do here. It's full of terribly pretty boys as well as interesting thinkpieces by men and women at the cutting edge of contemporary magazine journalism. They're halfway to their target already- all they need is a little help from open-minded people [and girls with a spare fiver who like to get their rocks off looking at arty pictures of tasty, nubile manflesh].

In case you needed even more persuasion, there's also a regular 'Ask A Feminist' agony aunt column, written by moderately-known shoutyblogger Penny Red, which I hear tell is an absolutely fantastic read, and only a fool would think otherwise. Go and buy the magazine, take back the gaze, and keep knobs in shops.
Posted by Penny Red at 15.8.09