Me, the Patriarchy and my Big Red Pen. 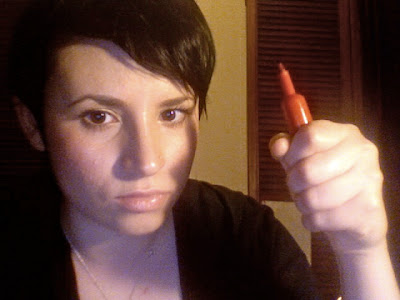 I'm back from the Feminism in London conference, where there were tears, standing ovations, rants, arguments (one between me and a nutty racist apologist in front of about a hundred bloody people) and where, in Bea Campbell's words, 'a good old think' was had by all. My brain is buzzing far too much to give the event the full write-up it deserves, so that'll have to wait. Meanwhile, here's what I did on the way home.
Defacing sexist tube adverts is something that's been pioneered by the Feminist groups I'm involved with in London over the past couple of years, but somehow I never seem to have had a pen, or a sticker, or the nerve, at the right time. At the conference they were giving out free permanent markers, so I shoved a couple in my pockets. The last session on prostitution, rape and objectification made me chokingly angry, and as I walked back to the station the anger was still there. Anger on behalf of the women I spoke to who have been raped, abused and silenced, anger that my sisters and I still have to live in a world where rape goes unpunished and child abuse goes unspoken and women starve themselves to death in their thousands in order to take up less space, where girls are brought up to hate their bodies and service men and be quiet and say sorry and fuck when we're asked to and shut up when we're told to unless we want to be thought of as crazy fucking bitches stupid cunts whores slags, certainly not fit enough for Rod Liddle to shag after a few drinks ha fucking ha ha.

And on this journey home, with all this rage and frustration boiling in my head, it just so happened that I saw one too many adverts trying to sell me painful, expensive surgery to increase my 'confidence'. 'All it needs is a little nip-tuck', the advert promised, next to a photograph of a woman with unreal breasts bulging out of a skimpy top and her head thrown back in a gormless grin like someone had shot her with a tranquilizer dart.

And I thought, hey, screw you. I've got a big red pen.

So I took my big red pen, apologising to the people I stepped past like the ridiculously English person I am, crossed out the slogan, and wrote 'This is not normal - fight sexism!' in big red capitals across the advert.

God, it felt good. It felt good, and it felt naughty - naughtier than shoplifting did as a kid, and the rush was bigger and better and braver. It felt so transgressive. Everyone was staring at me. I was invading sacred advertising space! I was breaking two of our biggest taboos - one, you NEVER mention that there might be something more important to a woman than looking whatever is currently considered 'sexy'; two, you NEVER talk back to the adverts. Never. Not allowed.

Thrilled, I got off the tube carriage and climbed onto the next one along, where I did exactly the same thing on two more adverts. I continued in this manner, with commuters muttering and tutting and one elderly lady giving me a big thumbs-up, until a bloke in his thirties sitting opposite me beckoned me over - crooked his finger and beckoned - and said - 'Come on, what's the problem, isn't it the woman's free choice? Can't she do what she wants with her money?'

I said: 'Of course she can. Just as I can do what I want with my big red pen. She's free to pay people to mutilate her and I'm free to attack people for trying to persuade me that I should do the same, or that my baby sisters should, or my friends. That is MY free choice, and MY free speech. And by the way, the woman in the picture doesn't really look like that, see that little halo around her boobs? Photoshop.'

We screeched into the station, and I jumped off and onto the next carriage with a rush of blood and bile to my head, feeling suddenly powerful.

By putting up adverts telling me that to feel confident I must look a certain way, for the purposes of which I must have surgery, the owners of these adverts are taking away MY choice to feel good about my body. But with my red pen and a little courage, today I took that choice back. And I feel more powerful, and more confident, than I have in a long time.
Posted by Penny Red at 10.10.09

Email ThisBlogThis!Share to TwitterShare to FacebookShare to Pinterest
Labels: feminism, I blame the meeja, rage, taking back the signal, vandalism