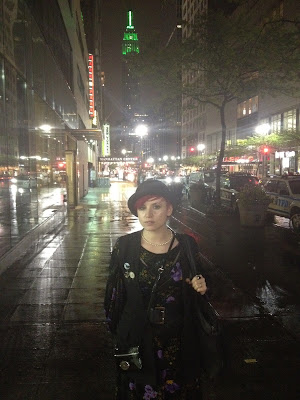 As you can see, I'm still in New York, I have a marvellous new hat, and here is another round-up post. This month I've been writing about, amongst other things, sex, politics, the future, nerd guns, protest policing and the mating rituals of the young and foolish in New York City. Here's the worst of the damage:


My guest post on WarrenEllis.com about Journalism, Activism and Honest Reporting went viral - it's a piece that was very important to me, and was based on a speech I gave at Left Forum in March.

My review of William Gibson's new essay collection, 'Distrust That Particular Flavour', is up now at The New Inquiry. Almost certainly my favourite thing I've written this month:  The Future, Probably.


Last week, I wrote for the Independent on men and their attitudes to sex, women and feminism - based on a survey I posted on this blog, which some of you were kind enough to help with. I'll be using those survey answers more in the future - stay tuned.


The piece I wrote right here at this blog about Lena Dunham, Katie Roiphe, kink and the politics of oppression was widely read (and led to a very interesting discussion over at Metafilter!)


Two short pieces for the Independent's notebook section: one on Trenton Oldfield, the boat-race anarchist swimmer, and one on dating in New York, in which I am possibly slightly unfair to writers, Brooklynites and coffee-shop lurkers like myself. Please note that am not, nor have I ever aspired to be, Carrie fucking Bradshaw.


And finally, this week's column on the run-up to Occupy Wall Street's planned May Day General Strike.

Incidentally, this month, which has involved me starting an exciting new job at The Independent, has also been full of more than the usual catalogue of attacks, rapebombing, slut-shaming, death threats, professional slanders, right-wing trolls, libertarian trolls, soi-disant radical trolls and mad people with vendettas, including former comrades, trying to push false stories about me into the gossip press. I try not to let it get to me, but sometimes it does get difficult. Despite all this I've managed to keep producing, but that might not have been the case without the support of a lot of wonderful people, friends and colleagues and near-strangers. I am massively grateful to everyone who has offered me their solidarity over the past few weeks - you know who you are, and I hope you know that your efforts are more than appreciated. Thank you. Thank you. Thank you. I love you.
Posted by Penny Red at 29.4.12