Sold out: an end to whataboutery. 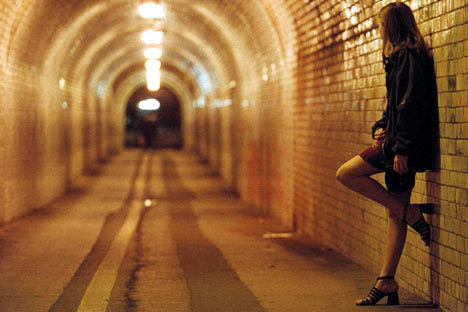 The Policing and Crime Bill 2008 is, as Fiona McTaggart MP admitted to me on Wednesday, 'a rag-tag bill.' Everyone has come to the table determined to force their own agenda through, and spurious amendments have been twatted onto every clause of the final document. There are some extremely dodgy new rules on kerbcrawling in there (similar, in fact, to those introduced in Ipswich in 2006, just before the tragic murders of six women who sold sex on the street) and some even dodgier ones giving the police powers to close brothels, and to take a cut of any takings found on the premises. Taken together, these two new rules make even less sense. You're still allowed to sell sex - just not indoors. And by the way, it's now more dangerous for you to do it outdoors. Speaking on behalf of the IUSW, Stephen Paterson pointed out that 'Lewis Carrol could have written these laws. They come from political cowardice and a herd instinct to assume the safety of the moral high ground.'
Somehow, though, the main bit of the new prostitution legislation has been pushed and pulled and wrangled into a shape that makes no one entirely happy but that somehow - maybe - just might bring us closer to social justice than any of the hard-liners would advocate.

The new law will make it a criminal offence - punishable by a fine of up to £1,000 and a criminal record - to pay to have sex with someone who is "controlled for another person's gain". This would target the market for abuse within prostutution - making it an offence to buy sex with a trafficked person or with a person who is forced into prostutition by pimps, drug-dealers or violent gang leaders.

Paying to sleep with a single mum who happens to have moved into prostitution because there's no other way for her to see her kids and pay for her prescriptions at the same time would not be illegal under the terms of this law, if it works the way I've been told. Paying to sleep with a young girl coerced into drug-taking by her pusher pimp who forces her to sell herself for her next fix would be illegal - and I've been twisting this round in my head, talking to the MPs making the laws and the sex workers affected by it, and whichever angle I look at it from, I can't see anything too terribly wrong there.

Do I think that all prostitution is rape? No. Do I think any prostitution might be rape? Well, let's think about that one. Let's think about the hundreds of young women being prostituted right now on the streets of our cities who don't want to have sex tonight but are being forced to service strangers by their pimps, drug-dealers, traffickers or violent partners, who have sex not for personal pleasure, gain or fulfilment but out of fear - fear of violence, of withdrawal, of exposure or even murder. Is paying for sex with these women rape? Yes, I think so. Yes, I'd say it's rape.
The abolitionist MPs backing these clauses prefer the Swedish Model, which draws no distinctions between paying for sex with a sex slave and paying for sex full stop. The compromise that has been reached, provided it stays in the bill in its current form, is a far more sensible solution. Not only does the 'controlled for gain' compromise set out to target abuse within the industry, rather than the industry itself - not only does it make it no less legal to have sex with a woman who is selling her body of her own free will - but this is the first piece of legislation ever, in over two hundred years of criminal legislation against hookers, which puts the blame for the 'social ill' of prostitution anywhere other than squarely between the legs of those who sell themselves.

McTaggart told me that part of the point of this law was to 'make a statement'. Is that important? Yes it is, vitally so, although I'd argue whether a new criminal law is the best, first place to be making that statement. But someone, somewhere, finally, needs to stand up and put the blame for abuse within prostitution where it's due: on the men who buy sex without a thought for the consequences. On the men who consume others' bodies for their own pleasure, who don't care where it comes from as long as they come. By making sex with women forced into prostitution a strict liability offence - one where it doesn't matter if you thought or hoped she wasn't a sex slave - this law might make prostitution what it so desperately needs to be: a seller's market.

Because currently, all the power within the sex industry lies with those who spend the money - overwhelmingly men. One in ten men in this country, in fact - mostly single men under forty. The balance of power and money is still in the hands of a patriarchy that treats abused women in the way that people who wear Nike trainers treat foreign sweatshop workers - as an unfortunate side-effect that we can make go away if we're very careful not ever to think about it, unless of course we happen to like the idea. And I think that's so wrong.

The English Collective of Prostitutes says it sees no reason why consenting sex between adults should be criminalised just because one party pays. They are entirely right - but 'consenting' is the most important word there.

Now, I'm not, as a rule, in favour of any new law that doesn't do away with the laws it's trying to update - and miraculously, at least in part, this looks like it's going to happen, too. To whit, they're going to take away the right of magistrates to impose fines for sex work. Let me repeat that. No more slapping a fifty quid fine on any poor streetwalker the fuzz happen to pick up. All they can now make orders for are 'meetings' - and according to McTaggart, this will include sessions with drugs counsellors.

This is fantastic. In anyone's book, this is fantastic. Questioning McTaggart over why the government isn't being braver and taking the logical, sane next step - making the selling of sex entirely legal - she replied that she and many of her colleagues in government would support such a move, but that it was being blocked from within. Blocked by whom, she wouldn't say, but I'm guessing that at least one of the blockifiers is very unhappy with women being allowed to sell sex and get away with it - unhappy with any suggestion that it might be the tricks and the pimps who bear responsibility for any abuse that happens, rather than the women's fault for opening their legs in the first place.

Is this bill, with all of its amendments, entirely sound? Absolutely not. Does this new piece of legislation go far enough in making life easier for prostitutes who choose their profession and harder for pimps and tricks who rape and abuse? No, it doesn't. But it's a step, a tiny step, in the right direction. If it were me, I'd make the selling of sex entirely legal to boot, and insitute a programme of advertising and a sex education curriculum where boys can learn from an early age what life is like for women in the sex industry. But hey, it's a start. To help you sort out your thoughts on this one, I've compiled a handy checklisty type of wotsit, inspired by Liberal Conspiracy's recent Gaza mythbusting efforts. Enjoy.


Prostitution - an end to whataboutery.
Posted by Penny Red at 25.1.09