National Take a Photo of a Police Officer Day 2009: stand up for citizen journalism! 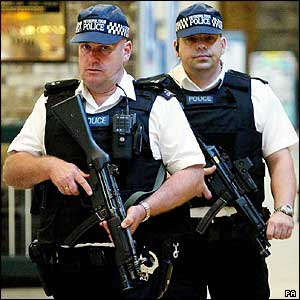 Set to become law on the 16th of February in the UK, the Counter-Terrorism Act 2008 amends the Terrorism Act 2000 regarding offences relating to information about members of armed forces, a member of the intelligence services, or a police officer. Laws are being introduced that allow for the arrest - and fining, and imprisonment for up to ten years - of anyone who takes pictures of officers 'likely to be useful to a person committing or preparing an act of terrorism'.

The law is expected to increase the anti-terrorism powers used today by police officers to stop photographers, including press photographers, from taking pictures in public places.

Does anyone else have a problem with this?

Picture, if you will, a protest, demonstration or piece of civil action. These can be inconvenient places for the government. A bunch of riot police wade in with batons, and a shocked bystander takes out her camera to preserve the evidence. The right of citizens to maintain sousveillance over their own police and military systems is vital to any healthy democracy.

So let's take back the gaze, if only for ten more days.

Starting from today, take a picture of a police officer on your phone or your camera and post it to this facebook group or email me at the address on the left. Photos will be collated (with permission) here and at participating blogs - if you don't want your photo to be included there, or if you'd like to remain anonymous, just email me.

To make it even easier for you, photos of police officers still count if the participating copper happens to be your mum, sister, school chum, etc. Standing laws mean that we can't take pictures of these people anywhere where they have 'a reasonable expectation of privacy': we're here to say that we don't think police should be expected to enjoy privacy whilst nominally protecting the peace.

Join in, tell your friends! The revolution will not be televised, but it WILL be on facebook.
Posted by Penny Red at 5.2.09