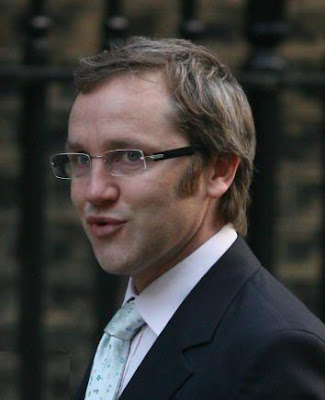 Sucks to be you, Jimmy boy!

'Responding to warnings that his reforms will not work without major changes, James Purnell, the work and pensions secretary, has abandoned plans to announce the preferred bidders for the multi-million-pound contracts this week. This follows demands from the firms involved for hundreds of millions more in "up-front" cash. A crisis meeting between top department officials and the bidding companies was cancelled on Friday after Whitehall announced a "short pause" in the tendering process.

The Department for Work and Pensions (DWP) said it had been called off "because of the snow", but one company manager involved remarked: "The most telling thing is that no new date was set."'

No, this doesn't mean we can relax. No, I'm not going to get off this man's back or stop pressing for liberal reforms in any small way that I can, not until I see a radical new deal on the table for the sick, disabled and long-term unemployed coupled with a requirement that work pay a living wage. Yes! Yes, alright, I'm a goddamn socialist! What are you looking at? *twitches*

After months of trying to feed six people on two minimum-wage salaries, after months hunting for jobs that don't exist in a market that mistrusts the physically and mentally impaired, my household has decided to beg the government for our dinners again. I've spent the last two hours filling in online benefits claims forms for my severely disabled partner, and no, the support isn't adequate and no, no I'm not happy about that. But I'm going to sleep a little bit sounder tonight knowing that there's less chance that my lamb of a lover is going to have to hobble on his poor leg to stack shelves in ASDA for less than half the minimum wage.

Thanks to everyone who commented on the welfare posts; keep on propagating, guys. It's too early to let our guard down just yet.

Email ThisBlogThis!Share to TwitterShare to FacebookShare to Pinterest
Labels: give us a break you bunch of fucks, little victories, socialism, welfare reform