Back home and unimpressed. 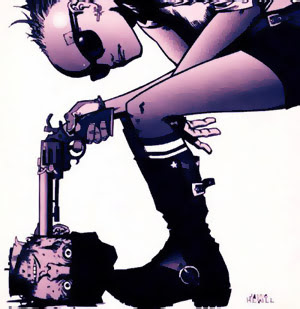 Well, I'm back, in case you hadn't guessed, in sticky old Blighty. Three days in the country and noone has at any point wished me a nice day, I already smell of fag-ash and no air-conditioning, and last night someone threw a dead mouse at my head in jolly good sport. I must be home. Not for long, though. In three weeks I'll be moving out of the little house where me and my friends have lived, in Turnpike Lane City of Dreams, for going on two years.

The reason I'm moving - to Mile End, specifically, land of Jack the Ripper, unfortunate schizophrenic train-shover-underers and George Galloway - is that we can no longer afford to live in our house. I at least am sorted for somewhere to move, because I'm a spoilt middle-class brat who got to do internships and, consequently, I still have a job, for the moment at least. But only one other housemate is currently working; we're in the middle of a torturous process of trying to access benefits, but it's agonisingly slow, and the subsistence money we're getting from the jobcentre isn't enough to keep us. And we're not the only ones.

The city is over-run with kids like us, grubbing around in wheelie-bins for the rag-ends of dreams we were sold in school. People are angry. The impossible has happened: free market capitalism has failed us, and real life is no longer the thick slice of fun pie that we were led to expect. Instead of doing anything worthwhile to help, our leaders have just been exposed as liars, fraudsters and charlatans, playing the system for everything it’s worth – defrauding the public purse for many times the amount scrounged by even the most wily benefit cheat. Me and my friends who have wasted years and years and got into thousands and thousands of pounds’ worth of debt slaving for degrees to prepare us for jobs that aren’t there are angry. We grew up being told that as long as we played the game, learned our lines, worked hard, were preferably white and rich and bought enough shiny things to disguise ourselves as good little boys and girls, joy, jobs and health insurance would be ours. But they lied to us: game-playing is no longer enough, was never enough.

I'm living with a close friend with a high IQ, excellent written and spoken English, top-notch computer skills and a degree from Oxford. The only job he’s even been offered an interview for in the past six months was the role of jobcentre assistant - the only boom sector right now – and this morning he was turned down for that. This confirms that our household can no longer support itself. We have to move; and whilst I’ve found a place, some of the people I live with are genuinely afraid that without the option of returning home, we’ll end up on the streets. This has got BAD. Most university leavers I know are simply fleeing home to live with mum and dad, which is a perfectly reasonable option at this point. But what about the rest of us? What about people like my housemates and me, who for whatever reason can't go home? What are we meant to do?

They LIED to us. And as that salient fact dawns, we are seething with range, panting with rage. The trouble is that rage alone is not enough.

A few weeks ago, I was heartened by the fact that the expenses scandal didn't seem about to be allowed to slink off any time soon. But today, expenses are still in the headlines and in people's frontbrains - expenses, scandal and how duped we feel by the entire political process. And that would be fine, it would be admirable, were it not for the fact that I can't for the life of me see the British Left getting anything else done. It's not just that the Guardian are letting the Standard editor publish pro-Tory pieces in their comment pages. And it's not just that the government and voluntary sector are being woefully tardy in doing anything for the 400,000 university leavers who will shortly be applying for the dole this summer. No, what gets me is that somehow we’ve let the Welfare Reform Bill – that one, you know, the one that’s going to screw over millions of jobless and disabled who one day might, just might, include you – get to the Lords stage and there’s been barely a murmur. Even the anti-poverty activist lists I’m on seem to have given up hope.

And I worry that people haven’t noticed. I worry that – what with Michael Jackson and the expenses scandal and the British Left tying themselves in knots over whether or not to pander to the Tories and Farrah Fawcett and Susan Boyle and the headline-munching heatwave and that Harry Potter movie – people just haven’t noticed that things are actually getting worse, right now, and not only is government falling apart and falling over itself to apologise like a surprised, stammering adulterer, they’re not delivering just when we need strong leadership and innovative ideas.

Not that innovative ideas have been short in coming from outside the Westminster bubble. I’m particularly cheered by some of the debate that’s been going on on Liberal Conspiracy this month, from rousing discussions of just what should go in a new British constitution, to the practicalities of living wage argument, to the high politics of Stuart White and Sunny Hundal's response to the 'Progressive Conservatives'' charge that British liberalism is actually illiberal. Compass, too, are doing sterling work, and their annual conference turned out to be only slightly crushingly depressing. Not everyone there was jaded: some of them were students.
But it's not enough. It's not *enough*, when there's so much work to do. We've got an economy to rebuild. We've got a generation of young people to rescue from drifting into a dichotomy of the drowned and the saved. We need more than vaunting ideas, we need practical plans, and immediate action. We need to be spending money right now on our children and young people, on building houses and care facilities for our elderly - but I see no concrete plans to do any of this, despite the fact that the Tories are already making their recession budget priorities clear (clue: it begins with a T and is mushroom-shaped). And yet liberal energy across the country seems tasered by fatalism.

This is my unimpressed face.