Penny Red's fashion tips pt.1: how to look cool at a protest. 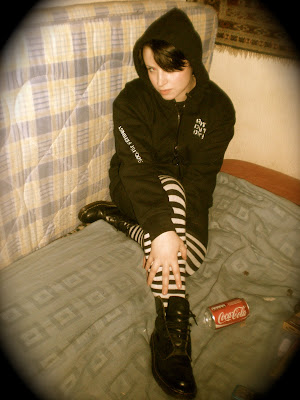 As you know, at this blog I try to keep my finger very much on the sputtering pulse of fashion, and touch base with what the kids are being persuaded to buy today. We're slap bang in the middle of all the major fashion weeks - we've just had London Fashion Week, and Milan Fashion Week is slithering to a close - so I thought I'd offer my own meagre contribution. Enjoy.

What’s hot now for the summer of rage! Ten ways to wow!
1. Go hooded. The sartorial symbol of our surveillance society never really went out of style, and it’s a staple that’ll see you through the entire summer of rage. Wear your hoody long and chunky to conceal problem areas – utility belts or a cheeky little can of mace– or thin and layered in case you end up having to leave your coat in the hands of the filth in the middle of a dubious British summer. Practical, versatile and a reliable staple for understated cool, your hoody is a statement of a sort of class fluidity which doesn’t actually exist in the UK, but is still a really lovely idea, particularly if you’re a Sloane down to play howling mob for the day. It makes it clear which side you’re on.

2. On the London and Milan catwalks, this season’s colours are, predictably, more muted and sober, in keeping with a general atmosphere of brooding dread and, one suspects, a lack of money for strong dyes at the major fashion houses. Work the trend by stepping out in spring’s hottest hues, from the dusky plum of ‘strangled banker’ to the looming grey of ‘policeman’s boot’, or the season’s statement colour, a watery, washed-out red known simply as ‘the ghost of Labour socialism’.

3. Hats. It’s Britain. It’s cold. It generally rains on the just. You need a hat. Yes, even if you have a hoodie. Don’t wear your granddad’s antique topper, not even ironically – it’ll get nicked, and before it gets nicked you’ll look like a wanker. Berets lend that non-committal counter-cultural atmosphere, but this season’s must-have headwear is most certainly the beanie: get it right and you’ll look like a gritty extra from Matrix 2 channelling tha futurist revolution, man-versus-hypercapitalist machine feel that’s so hot right now. Get it wrong and you’ll just look like a person wearing a beanie, and everyone will assume that you were a teenager in the nineties. I hear that’s still chic. Don’t wear a bowler either. If the papers are to be believed, you’ll be lynched by a screaming mob of disaffected workers and unemployed graduates suddenly unable to afford their daily macchiato.

4. Masks. Recent years have seen mask-wearing back on the frontline of demo chic across the world, spearheaded by big protest brands like Anonymous. The iconic mask is, of course, the V for Vendetta Guy Fawkes variety, popularised by the recent film adaptation of Allan Moore’s eponymous graphic novel and initially sold as tie-in merchandise. Pros: it definitely looks creepy. It sends a very distinct message, especially if you’re demonstrating in the UK and especially if you’re going to be within shouting distance of Parliament Square. It’s still zeitgeisty enough to be edgy, and nobody’s yet been papped coming out of Whiskey Mist in a V mask. Cons: it’s a bit of a cliché, someone might think you’re a member of Anonymous, and, most importantly, if you’re going to be on a demo you might as well stand up and be counted. I’m for faces, on both sides. If you really must mask up, think outside the barrel: Thatcher and Reagan masks are a wardrobe staple for any pop activist worth her salt, or you could try customising your own carnival mask, one of the glittery sort stocked by fancy-dress shops, for an eclectic look with that little hint of Venetian debauchery.

5. Kevlar. Forget tweed, forget silk: Kevlar is this season’s fabric. Not only is it versatile and on the cutting edge of mid-nineties grunge revival, it’s stab-proof and tough as a mummy’s nuts. See? Fashionable and practical.

6. The 21st-century activist knows how to accessorise. That old staple, the whistle, has stuck around for a reason, but if you want to make a really big statement, consider a hand-held loudspeaker. Flyers are this season’s equivalent of the pointless-little-clutch, and if you want to blend trends you could always carry them in a pointless-little-clutch, although you might have to drop it if you need to run anywhere. Other old favourites are the water bottle, the rape alarm, the emergency biscuits and the packet of wet-wipes. You will definitely need a packet of wet-wipes. Trust me on this. The biscuits are almost as important, as they double as a way to stoke group solidarity as well as preventing those pesky little sugar crashes. Nobody wants to be seen stopping off at Pret A Manger in the middle of a rally.

7. Heels. Don’t even think about it, not even – and it pains me to say this – not even if you’re a fabulous weekend queer. No, actually, do think about it. Think about walking for several hours across tarmac or grass,wearing stupid little kitten heels. Think about trying to make a run for it and snapping your stiletto. They’re not even useful anymore, since any kind of shoe held in the hand is now officially considered a weapon in bodily harm and assault cases. Nice, stompy practical boots are the way to go, and you can be on-trend in a pair of Dms or nice and dry in some army surplus. But let’s face it. This isn’t Milan. Nobody’s going to be looking at your fucking feet, unless you’re stupid enough to try and kick a copper in the head, in which case you’re drunk or you’re a sociopath, and either way you shouldn’t be on the march.

8. Possibly the most important tip of all: waterproof mascara. Look, the government is getting bloody frightened of us. First sign of trouble, it'll be the tear gas, the pepper spray and the hoses. Whilst you're waving your battered placards in an agony of face-aching chemicals, take comfort in the fact that your make-up, unlike your paycheck, your house and your benefits, isn't going anywhere. Where's that mascara going? Nowhere. You rock that scene, demo-girl!