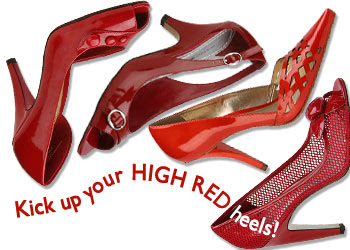 Hurrah, I'm 23 now, and I'm batting back and forth between the Labour Party Conference, my mum's house and my dad's house, all of which have so far involved getting free stuff on my birthday but only one of which has offered me the opportunity to get ratarsed on socialist champagne in a corner of the Thistle with other massively depressed bloggers and stumble into Peter Hitchens on the way out. Atmosphere swinging between crashingly pessimistic and somatically, blissfully naive about the outlook for the Left post-recession and post-2010. Much talk of equality and the fairness agenda, but no women's empowerment angle anywhere, by contrast with the Lib Dems last week. More, hopefully much more, on this later.
Meanwhile, here's my second column for Morning Star, out today, on the TUC's motion to ban compulsory stiletto-wearing in the workplace. Enjoy!
*****
This fairly straightforward motion has caused uproar in the press, with right-wing politicians and brand-endorsed celebrities stumbling in to defend the high heel as essential to female "empowerment."
As it stands, many female workers, including airline staff and shop workers, are required to wear stilettos as part of a mandatory dress code, a standard which does not apply to men - even though, as Lorraine Jones of the Society of Chiropodists and Podiatristspointed out, "Two million working days are lost every year through lower limb and foot-related problems. High heels... are not good for the workplace."
But noted Tory moralist Nadine Dorries argued that the extra height can help women in the workplace. "I'm 5ft 3in and need every inch of my Christian Louboutin heels to look my male colleagues in the eye. If high heels were banned in Westminster, no-one would be able to find me," she wrote.
As a feminist, a fashion-lover and a fellow short-arse, I find that sentiment wobblier than a pair of thousand-dollar Manolos.
I don't need high heels to look a man in the eye. It's not that I disapprove of high heels, more that I've mentally filed them into the box of things that other people inexplicably seem to get very excited about, along with indoor rockclimbing, curry-flavoured potnoodles and David Cameron.
For me, heels are a baffling transaction where a lot of pain, money, effort and inconvenience is traded for the dubious but somehow vital asset of longer, tauter legs and breasts and buttocks thrown out at teetering right angles to your centre of mass. They may make you look taller, but they also make you appear vulnerable, unstable, even submissive - and that's not my idea of sexy, powerful femininity. Fashion they may be, but stilettoes have nothing to do with style.
Be that as it may, stilettos are the misogynist, multibillion-pound beauty industry's wet dream. Their very painful ridiculousness makes them easy to glamorise and the image of a pair of disembodied legs in sky-high heels, from chick-lit covers to chocolate wrappers, has come to symbolise the ad-men's fantasy of modern femininity - impersonal, unthreatening and product-driven.
Speaking of product-driven, not only do the bastard things wear out after about five minutes, meaning that no matter how much you've paid for them you'll be forking out again in a few weeks, you actually need to buy extra stuff to cope with wearing high heels - sparkly heel-pads, those cute little girly first-aid kits specially for stiletto-wearers, and, of course, an extra pair of flats in your handbag for when you break a heel or start hobbling with the pain.
High heels are ruthlessly marketed as part of a certain cash-flashing fantasy feminine lifestyle, so much so that that certain brand names have become synonymous with flimsy, mindblowingly expensive little squished-up foot-harnesses.
When we hear Christian Louboutin or Manolo Blahnik, we think of Carrie Bradshaw toppling from a swish nightclub into a New York taxi on the arm of Mr Big - and we're probably not admiring her fantastic spinal alignment.
To find out how the fantasy holds up to reality, I asked real New York princess Suzanne Reisman, feminist blogger and author of Off the (Beaten) Subway Track, for her view.
"Trust me, any New Yorker who regularly rides the subway or walks anywhere does not wear stilettos on a daily basis," she replied. "Even the most talented stilt walker would break an ankle.
"I think high heels are the exact opposite of empowering. With enough wear, they are permanently physically damaging, resulting in back pain, knee damage and deformed feet and calf muscles. If a shoe causes harm to the wearer, I do not see how it can be described as empowering. Employers should absolutely not mandate that women wear heels to work. When is this woman-hating trend ever going to go away?"
Now far be it from me to disapprove of people's favourite little tortures [read the rest at Morning Star Online...]
Posted by Penny Red at 29.9.09