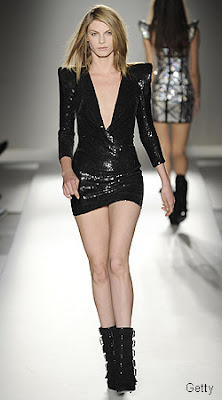 This week I've kicked off a new lifestyle column for Morning Star, in which I attempt to be the tiny dirty socialist-feminist Carrie Bradshaw in what I hope is a knowing, ironic postmodernist kinda manner. Erm, yeah. Anyway, these will be coming out every fortnight. Hope you guys enjoy them!
***

Popular wisdom holds that fashion, sex and shopping exist in a fluffy bubble hermetically sealed off from real-world politics. This is untrue. Consider, if you will, the resurgence from Brick Lane to the Milan catwalks of the statement shoulder pad.

When I heard that the 1980s were back in style, I was heartened to imagine that the bright young ladies of the 21st century would all be joining trade unions, standing on picket lines and forming human chains around cruise missile bases. It seems, however, that '80s trends that have soared to the dizzy heights of retro cool are pulsing keyboard music, synthetic fabrics, poodle perms and jagged silver lightning streaks on everything from cardigans to crisp packets.

And, as with any retro wave, the 1980s have careered most spectacularly into women's fashion, bringing back a trend once thought to be buried at the crossroads with a stake in its heart and a glass ceiling over its head - power dressing.

Myself, I was mostly rocking a gender-neutral red romper suit in the latter half of the '80s, but I've been waiting for statement shoulders and sharp suits to be back in the shops ever since I saw Jamie Lee Curtis pull a gun from her synthetic shirtsleeves in A Fish Called Wanda. Power dressing meant strong lines, strong shapes, gloss, glamour, big hair, big shoulders and big ambition. Its appropriation of masculine tailoring into feminine fashions echoed a new influx of upper-middle-class women into business and politics.... [click here to read the rest at Morning Star Online]