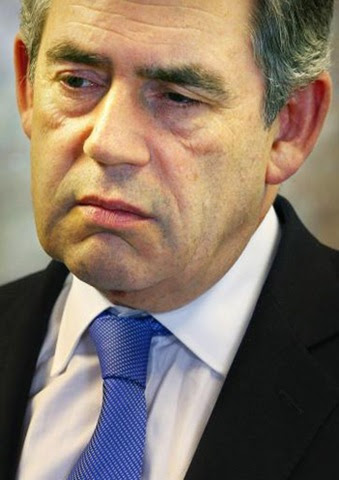 So. Rumour has it [well, Guido has it] that Prime Minister Gordon Brown is taking a course of mood-stabilising anti-depressants. Several major blogs and broadsheet columnists of all stripes have gone public with the allegation that Gordon Brown is taking “heavy duty antidepressants known as MAOIs (Monoamine Oxidase Inhibitors)”. This rumour, along with what Guido reminds us are "the stories of rages, flying Nokias, smashed laser printers, tables kicked over and crying Downing Street secretaries subjected to foul-mouthed tirades", have led many in the national press to suggest or imply that Brown's leadership is inherently undermined by his alleged mental health difficulties, as well as by the medication he supposedly takes for those difficulties.

We have no way of substantiating this rumor, but let's for a moment run with the assumption that Brown is taking anti-depressants. My response? Good. Great. If the Prime Minister of Britain is suffering from depression or some other mental health condition, which given the stresses of his current position seems highly likely, then I'm glad he's getting treatment for it. I'm glad he's man enough to admit that he might need help. Anti-depressants are used by millions of people in this country, although the stigma attached means that many of us don't talk about it, and in almost all cases barring those of people detained against their will in institutions, the process is both voluntary and helpful. It takes courage to go to the doctor and say that you have a problem, even if you're not a leading political figure who's constantly in the public eye. I only wish more politicians would follow his example - after all, it's not as if mental health difficulties in government are unheard of.

Some of the greatest leaders the Western world has ever seen had serious mental health difficulties. Winston Churchill was plagued by crippling depression, which he referred to as 'black dog' and treated with that much less effective anti-depressant, booze. Lincoln was also chronically depressed and anxious. The Time To Change campaign has hilighted these examples, along with other famous figures who had mental health difficulties, such as Florence Nightingale and Charles Darwin. Last year, a Mind investigation found that large numbers of politicians and staff were forced to hide mental health problems, with 19% of MPs, 17% of Peers and 45% of staff reporting personal experience of mental health difficulties. And in 2001, the Norwegian Prime Minister Kjell Magne Bondevik outed himself as a person with depression, and was subsequently elected for a second term.

So is the 'Prime Mentalist', as he has become known, a person who has mental health problems? It certainly seems likely . Would that fact, by definition, make him unfit to lead the country? Absolutely not. Not only have plenty of great statesmen and women had mental health problems, the experience of overcoming those problems and playing to one's strengths may even be an advantage in politics - as it is for many people who, like myself, battle mental ill health.

You need to be a bit mental to play the politics game, and if you aren't to begin with, you might be before long - 86% of MPs say that their jobs are stressful, and at a recent Depression Alliance event Laura Moffat MP bravely told guests that her own experience of depression was a direct result of her valuable and ongoing work in poltics. A symptom such as paranoia, believing everyone hates you and is talking about you behind your back, may well be a perfectly rational response to, say, being Gordon Brown. I'd wager that few politicians are entirely sane, especially not the successful ones - just take a glance at Tony Blair or David Cameron if you want to see what an obviously broken personality looks like. On the other hand, just for example, it's perfectly possible that Enoch Powell and his dimwitted BNP descendants are entirely sound of mind - stupid, prejudiced and evil, but sane.

One's mental health does not affect one's morals or one's ability to lead. To say that Gordon Brown is a mentalist may well be accurate, but it's also entirely beside the point. Gordon Brown is not a weak leader because of his mental health. If he is a weak leader, it is because he lacks the courage of his convictions, because he no longer has a convincing political narrative, because he is out of steam and out of ideas.

So let's challenge Brown for being a worn-out, uninspiring leader who we're all a bit sick of. Let's bring charges of cronyism, aggression, lack of charisma and lack of ideals. But don't let's for a moment suggest that his mental health - good or bad, medicated or unmedicated - has anything to do with it.
Posted by Penny Red at 10.9.09

Email ThisBlogThis!Share to TwitterShare to FacebookShare to Pinterest
Labels: gordon brown, mental health, politics, why Guido is an arse