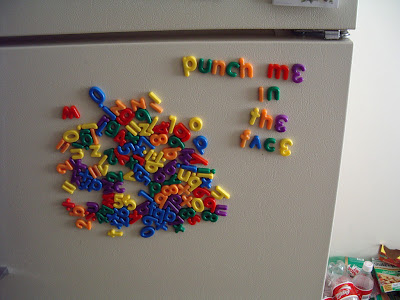 I know, I know, I'm a week late with this. My excuse is that I've had a metric fuckton of deadlines; but more than that, I didn't know quite what to say. It was all a bit depressing, really, and it made me angry, and sad, all at once.
Firstly, thank you for your comments. Mr Purnell and his aides read all of them, and took them on board. Myself, I feel I got the mockery out the way by bringing him a peace offering of some lovely fridge magnets, since the newspapers tell me he likes them, enough to spend well over the monthly JSA stipend on fridge magnets and claim it all back off the state. One of them had a picture of Che Guevara on it. Give him his due, he laughed.

We had a half-hour meeting, Purnell and his aide and I, and the first half was mostly taken up by him talking up the new scheme for guaranteeing a limited number of long-term young jobseekers minimum-wage work, whilst simultaneously making it very clear that as he'd resigned from the cabinet this really wasn't his job anymore.

At some point during the meeting, I got tired of the equivocation. So I decided to tell him the truth and see if I couldn't make him listen. Very quietly, and mindful of how ridiculous I might sound, I said* -

"Look, James. You know and I know that the damage has already been done. There are hundreds of thousands of young people and people with disabilities out there whose lives have been entirely scuppered by a batting team of the recession and your damn stupid benefit policies. Sure, you're trying to guarantee jobs for one in ten of them now - but that's not enough, and we both know that. I'm not here to shout at you or to tell you how angry I am with you, and I'm not here to point out the massive hypocrisy in your personal behaviour over the expenses scandal -there wouldn't be a lot of point in that. I'm here to ask you, please, to listen.

"People are hurting, right now; people like my partner and my former housemates are in desperate situations and they are hurting. You're a highly ambitious, brilliant politician. There's not a small chance that by the time you're leader of the Labour Party or Prime Minister of Britain [note: neither Purnell nor his aide moved to correct me at this point] we will still be hurting, still be desperate, and some of us might still be unemployed. I want you to remember, please, that you owe us a voice. I want you to remember that our votes count, too, and that we are people just as much as people who are lucky enough to be employed. It's too late for some of us now; but we're good, bright young men and women who just want to earn our way, and our votes count as much as anyone's. So when you're powerful again, please remember us, and remember that you owe us. And that's all I have to say."

At which point, Purnell said, "Thank you. That seems like a good point on which to end the meeting".

I should point out that whilst I was muttering all this I was intermittently picking at a growing hole in my tights. I'm a lot less confident in person, especially when I've got something important to get off my chest. The planned flounce-out was somewhat derailed by my being dragged down to the nearest pub by the aide and a couple of other nice young ladies from Demos, and the whole evening ended rather ignominously with me yelling politicians are all such pussies! down Tooley street in the dark. The young people at Demos are the best of the bunch; one gets the impression that they're really, truly trying. However, I lost count of the times I was told that 'people like you are important, because you're passionate'. For fuck's sake. I'm not 'passionate', I'm angry, and I'm angry for a reason. Why aren't you?